The Texas Democrats need the issue 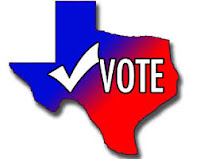 We learned that the Biden DoJ is going after Texas again.  The issue now is the election integrity law signed by the governor.  You may remember that it was this law that had Democrats flying to Washington, catching COVID, with some even going to Portugal to get married.  Eventually, they came back and the law is on the books.

Why is the DoJ doing this?  This is what they are saying, according to CNN:

The DoJ makes no sense because no one is being denied their right to vote.   Let's look at what happened on Tuesday.

The victory by Lujan gives Republicans an early win in their drive to make new inroads in South Texas after President Joe Biden underperformed there last year.

With all vote centers reporting Tuesday night, Lujan was leading Democrat Frank Ramirez 51.2% to 48.8%, according to unofficial results. Lujan briefly held the seat in 2016, while Ramirez is a former staffer for the San Antonio City Council and at the Texas Legislature.

I should add that former Rep. Beto O'Rourke campaigned for Ramirez, the Democrat.  On the other hand, Governor Greg Abbott was a strong supporter of Lujan, the winner.   We hear that O'Rourke may run for governor in 2022.

The DoJ is just acting political.  They want Texas Democrats to have the issue just a little bit longer.  Fortunately, the voters are not buying it.  The voters are voting but they are not voting Democrat.