Wednesday's show: A chat with Carmen Maria Montiel, GOP candidate for US House # 29

As we learned in school, yellow fever had a devastating impact on the world around the time of the construction of the Panama Canal, a little over 100 years ago.
Sadly, there is an outbreak of yellow fever in Brazil, as we see in this report:

The Centers for Disease Control and Prevention has advice for people thinking about traveling to most parts of Brazil: get vaccinated against yellow fever, or stay home.
Brazil is currently suffering a major outbreak of the hemorrhagic fever, and it’s striking places that don’t normally see the virus.  Since the beginning of 2017, 237 people, including several tourists, have died after becoming infected with the virus.
Carried by mosquitoes, the virus has also spread to the very edge of Brazil’s largest cities, São Paulo and Rio de Janeiro, and has also infected mosquitoes on the Ilha Grande, a major tourist destination not far from Rio.
“This is the time not to go into an outbreak area unprotected,” said Dr. Martin Cetron, director of the Division of Global Migration and Quarantine at the National Center for Emerging and Zoonotic Infectious Diseases at the C.D.C.  “We recommend people defer travel to these areas of transmission if they can’t be protected by the vaccine.”

Am I the only one who finds this story unbelievable?  After all, we are talking about two of the largest metropolitan areas in the world, Rio and São Paulo, and a country with a Top 10 GDP.
The health implications are compounded by two things:
First, a country awash with rumors exploding in social media.  My friend in Brazil wrote that it is not unusual to get a tweet or Facebook message about an outbreak here or there.  People are consuming one rumor after another.
Second, Brazil’s political class has very little credibility following an impeachment, one scandal after another, and bad economy.
It’d be better not to travel to Brazil in the near future.  If you must, get the proper vaccine or medication.
PS: You can listen to my show (Canto Talk) and follow me on Twitter.
Posted by Silvio Canto, Jr. Post Link ---> 10:30 PM

Reality hit Governor Murphy as we see in Zero Hodge:


New Jersey's fiscal situation is so dire that new Governor Phil Murphy has proposed taxing online-room booking, ride-sharing, marijuana, e-cigarettes and Internet transactions along with raising taxes on millionaires and retail sales to fund a record $37.4 billion budget that would boost spending on schools, pensions and mass transit.
The proposal which is 4.2% higher than the current fiscal year’s, relies on a tax for the wealthiest that is so unpopular it not only has yet to be approved, but also lacks support from key Democrats in the legislature, let alone Republicans. It also reverses pledges from Murphy’s predecessor, Republican Chris Christie, to lower taxes in a state where living costs are already among the nation’s highest.

Why the elephant and the donkey? 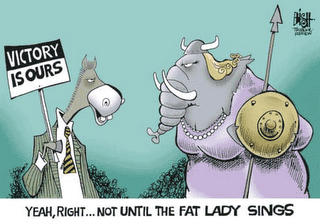 Why do US cartoonists use a donkey for Democrats and an elephant for Republicans?

It started many years ago. They are the party mascots.

Frankly, I have never understood why the Democrats would want a donkey as their mascot.  Of course, I don't understand a lot of things about Democrats.    They are the "donkey party" in my book!
Posted by Silvio Canto, Jr. Post Link ---> 9:30 PM

The Republican primary in Pennsylvania?

The two candidates in Pennsylvania agreed on most issues. Lamb was anti-Pelosi, pro-Trump tax law, pro-life, very pro-Second Amendment, anti-single pay and presented very conservative positions. At times, it had the feeling of a GOP primary rather than a general election.
— Silvio Canto, Jr. (@SCantojr) March 14, 2018