A little too much Harry and Megan 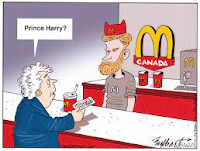 A few years ago, we saluted Prince Harry for serving in Afghanistan.  He could have stayed home, because the UK government was concerned about the prince being captured and turned into a PR victory for the enemy.  Nevertheless, he served and that showed a lot about his character.  Cheers for Prince Harry.

More recently, he is turned into an obnoxious personality.  He married Megan, left the UK and now is desperately looking for attention every day.  This is from Fox News:

Prince Harry recalled the "heartbreaking" reaction his wife Meghan Markle had when the couple learned of the bullying allegations made against her.

Just days before their sit-down with Oprah Winfrey aired in March, the U.K. Times reported that the Duchess of Sussex faced a bullying complaint made by one of her former advisors during her time as a working royal at Kensington Palace.

In his new AppleTV+ docuseries titled "The Me You Can’t See," which he co-created with the media mogul, Harry described how the 39-year-old broke down crying one night due to the "combined effort of The Firm and the media to smear her."

Okay --  but does anybody care?  I don't, and my guess is that most people are sick and tired of all of this whining from the couple desperately seeking attention and maybe money.

Memo to Harry and Megan:   Do something productive.  We all have problems and we don’t want to hear yours.

Memo to media:   Stop giving this couple the time and space to whine and tell us how bad their lives are.

Again, I don't want to hear it!