Sunday’s video: July 2019 and the moment that the Democrats blew up. 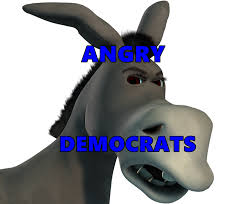 ‘Blue on blue, heartache on heartache’

Bobby Vinton did not have Speaker Pelosi in mind when he recorded “Blue on Blue,” a big hit many years ago — i.e., the pre-Beatles era!
Nevertheless, there is a little too much “blue on blue” in Washington these days.  It looks as if the Democrats are now devouring each other now that nothing seems to work against President Trump.
The latest case of “blue on blue” is Rep. Sharice Davids, D-Kansas, and the Left.  This is from Fox:

The official House Democratic Caucus Twitter account ripped into Rep. Alexandria Ocasio-Cortez’s, D-N.Y. chief of staff Friday for his criticism of another Democratic lawmaker — an astonishing tirade that laid bare the simmering tensions between the freshman congresswoman and her party’s leadership.
The caucus’ Twitter account flagged a June 27 tweet by Ocasio-Cortez’s chief of staff, Saikat Chakrabarti, in which he criticized Rep. Sharice Davids, D-Kansas, for her votes on issues to do with the migrant crisis at the border.
“I don’t think people have to be personally racist to enable a racist system. And the same could even be said of the Southern Democrats. I don’t believe Sharice is a racist person, but her votes are showing her to enable a racist system,” he tweeted.
On Friday night, the caucus account took aim.
“Who is this guy and why is he explicitly singling out a Native American woman of color?” it said.
“Her name is Congresswoman Davids, not Sharice,” the House Democrats added. “She is a phenomenal new member who flipped a red seat blue.”
“Keep Her Name Out Of Your Mouth,” it said with interspersed emojis of clapping hands.

By the way, we are talking about adult women in the U.S. House.  These are not teen girls fighting over their favorite boy.
The Democrats face two major problems:
First, it seems that the more irrational they get, the more they fight with each other, especially with those Democrats who flipped red seats or the ones who made their majority possible.
Second, all of their efforts to destroy President Trump have proved totally useless.  In other words, many of them are starting to come to terms with the reality that 2020 is not going down as they had planned.
So they fight with each other, and we love it!
PS: You can listen to my show (Canto Talk) and follow me on Twitter.
Tags: ‘Blue on blue, heartache on heartache’ To share or post to your site, click on "Post Link". Please mention / link to the My View by Silvio Canto, Jr. Thanks!
Posted by Silvio Canto, Jr. Post Link ---> 8:50 AM