Monday’s video: They say that Beto is running 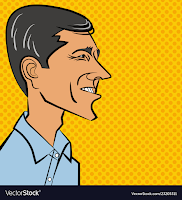 I guess that's what happens when no one is watching

For some time, especially since President Trump left office, we've speculated about CNN.  How long can they keep losing viewers?  Well, the answer may be coming.  More correctly, a CNN shake-up may be around the corner.

This is from Jonathan Davis:

Left-wing news network CNN is reportedly considering a major shake-up of programming and personalities amid tanking ratings that saw none of its regular shows averaging even a million viewers per episode in October.

While the network’s viewership has declined steadily since President Donald Trump left office, last month’s numbers were bad enough to trigger some major changes, according to a report.

The numbers are amazing, but in the wrong way:

“CNN averaged a devastating 480,000 in total day viewership in October, a whopping 76% drop from January amid the chaotic transition from President Trump to President Biden.

Fox News averaged 1.4 million and maintained its total day viewership from earlier this year while MSNBC averaged 657,000 viewers in October, resulting in a 61% drop from January. The network lost 14% of its viewers from September,” Fox News added.

What does it all mean?  What it tells me is that some people are watching cable news but they are not watching CNN.

The rumor going around is that CNN will replace the Lemons and Cuomos of the world with people who just read news, sort of like the Headlines News format of the 1980s.  It may work given the hyper-partisan nature of CNN's current news coverage.  No matter what, watching news will be different in the near future.

We say happy birthday to Beverly D'Angelo.   She was born in Ohio on this day in 1951.   She was the famous and good looking "mom" in those "Vacation" movies.   Very funny films.