Trump finally got Biden to gaffe.... 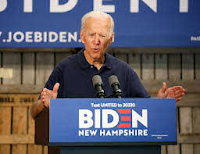 For months, the Biden campaign was based on not answering questions and keep the media at bay.

Well, it ended at the debate when he finally had to say something beyond "Trump does not listen to science" or "I will be a president for all Americans."  He also did not hold up well, and Doug Schoen saw it too:

He struggled to come up with coherent answers to pressing questions from Trump about controversial topics -- such as receiving funds from Russian sources -- other than to issue blanket denials and turning the accusation back onto Trump.

Further, Biden committed a number of gaffes throughout the night, including making a misplaced Hitler reference that confounded pundits across the aisle.

And he probably lost Pennsylvania with his confusing remarks about fracking.

In sports, as in campaigns, there are moments when the momentum changes, i.e. the stolen base that sets up the tying run, the interception that narrows the score!

The momentum changed for two reasons:

First, Biden could not explain anything, from legalizing 11 million people to making a transition to renewable energy; and,

Second, President Trump focused on his successful record and explained it better than ever.