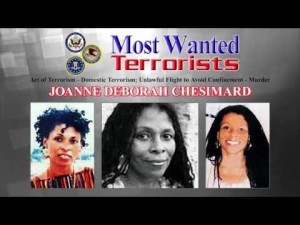 You may recall the story of Joanne Chesimard.  A radical and violent leftist, She was convicted in the 1970’s of killing a New Jersey state trooper and then escaped to Cuba.
Joanne then became Assata Shakur and was granted political asylum in Cuba.  More than that, she became the darling of the revolution or the black woman who represented everything racist and evil about the US.  It was pathetic.
We are happy to see that Governor Christie wants to bring her to justice, as we read a couple of days ago:

In 2015, when then-President Barack Obama reopened relations between the United States and Cuba, there was hope that Chesimard would be returned to finish her life sentence. But she remains free today, even though the Obama administration said her return would be part of diplomatic negotiations with the communist regime.
Appearing Friday night on Fox News Channel’s “Tucker Carlson Tonight,” Christie said “it’s outrageous” that Chesimard lives in freedom, and he pressed the administration of President Donald Trump to fight for her extradition to the U.S.
“I hope that what the Trump Administration is going to do is, before we take any further steps with a relationship with Cuba, that they say, ‘Listen, first and foremost, return this fugitive from justice back to New Jersey so that she can rightfully serve the rest of her term for murdering a police officer,'” said Christie, a friend and supporter of Trump.
“I think this is something that Secretary of State [Rex] Tillerson and others in the Trump Administration should make a top priority in any dealings they have with Cuba,” Christie added.

Indeed it should be a top priority!
The Chesimard case is exhibit A of everything that was wrong with President Obama’s deal with the Castro regime.
Unfortunately, the Obama team did not demand her release, or frankly demand anything at all.  it was simply a case of Mr. Obama desperately seeking a deal and not looking out for the US, or in this case a public official killed by a terrorist.
The Castro regime needs dollars and harboring this “oldie revolutionary” is of little value.  She means nothing today and should have been one of the many conditions that the Obama team put on the table.
Let’s hope that President Trump takes a different posture.   State Trooper Werner Foerster’s family deserves nothing less.
P.S. You can listen to my show (Canto Talk) and follow me on Twitter.

Tags: Obama Care and GOP,  Allegations of surveillance on Trump, Gorsuch and the Supreme Court hearings To share or post to your site, click on "Post Link". Please mention / link to the My View by Silvio Canto, Jr. Thanks!
Posted by Silvio Canto, Jr. Post Link ---> 6:00 PM

What happens next with Obama Care?

Terror in London, Rape in Maryland, Team USA and a few other stories

Mexico, Odebrecht scandal and Latin America stories of the week

Repair Obamacare? Call on Dems to present their plan

For the record, I would have preferred for the GOP House pass an imperfect bill and move it to the US Senate.  It would have shown that we can govern and given Senator Cruz, Senator Lee, and a few others a chance to make the case for a full repeal as promised to voters.  It would also have forced many red-state Democrats to speak about it.  Last, but not least, President Trump would have had a victory.
Instead, we get to read Ezra Klein say the GOP cannot govern, or Democrats claiming victory, and so on and so on.
I love the Democrat who said the American people had voted to preserve their health insurance.  Can someone tell that Democrat that it was a group of GOP members who killed it because the proposal on the floor did not go far enough?  Demagoguery knows no bounds!
What happens now?
The Democrats won a short-term victory, indeed, but they set themselves up for a huge loss down the road.  In other words, it is still Obamacare after Friday’s vote, and it is not getting better.
Like a very sick patient, Obamacare will soon move to hospice and die.  We may call it the point of no return for a poorly designed plan that few Democrats had the courage to vote against in 2010.  (Maybe they were hoping Justice Roberts would kill it for them!)
A short time ago, we heard some pretty bad news about enrollment and the state of the plan:

The 2017 final figure, which updates a preliminary report released last month, was down from 12.7 million in 2016.

Furthermore, as the article points out:

Several major insurers have pulled out of the marketplace over the past year, citing losses from sicker-than-anticipated customers. Many insurers that remained increased premiums sharply this year.

What does President Trump do?
President Trump can just sit back and let Obamacare go bust.  This is tempting because it will force the Democrats to defend it.  Again, it is still called Obamacare after Friday’s no vote.
He could publicly call on Democrats to present ideas to “repair it,” as they say.  Let’s see how many of those ideas are nothing more than huge tax increases or more subsidies.  So far, the Democrats have had the benefit of defending Obamacare in the abstract.  Let’s call on Mrs. Pelosi and Mr. Schumer to tell us what they have in mind.  My guess is that they are not really looking forward to that.
There are no pretty options now.   Obamacare will implode, and Democrats will regret the day they didn’t work with Speaker Ryan to move something to the Senate, where they have more power.
P.S. You can listen to my show (Canto Talk) and follow me on Twitter.
Read more: http://www.americanthinker.com/blog/2017/03/repair_obamacare_call_on_dems_to_present_their_plan.html#ixzz4cQlaVYqaFollow us: @AmericanThinker on Twitter | AmericanThinker on Facebook
Tags: Repair Obama Care  To share or post to your site, click on "Post Link". Please mention / link to the My View by Silvio Canto, Jr. Thanks!
Posted by Silvio Canto, Jr. Post Link ---> 7:00 AM