Monday's show: A look at the upcoming Texas elections with George Rodriguez 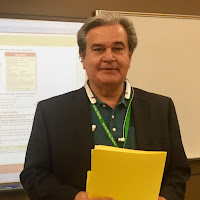 Monday's show:
A look at the upcoming Texas elections with George Rodriguez

Monday's video:
Down in Brazil, Mr. Bolsonaro almost won the presidency in the first round. He got 46% and looks very
strong going into the runoff......click to watch:

Monday's video: The Brazil election, round one

Monday's video:
The Brazil election, round one

Investors are smiling in Brazil this morning..........

Investors are smiling in Brazil this morning. They like Bolsonaro’s economic policies including his proposals to privatize state-run enterprises and give greater independence to the central bank. We do remind you that Bolsonaro has to win the next round.
— Silvio Canto, Jr. (@SCantojr) October 8, 2018

This is why Taylor should stick to making music. Taylor Swift blasted GOP Blackburn for supporting Kavanaugh. Then she endorsed Democrat Bredesen who supported Kavanaugh too. Maybe Taylor should've read the front pages in Tennessee before making endorsements.
— Silvio Canto, Jr. (@SCantojr) October 8, 2018

Brazil election update: Bolsonaro got 46% and Haddad 29%. It means that they will go to a second round. As I recall, the polls had both candidates a lot closer. Bolsonaro is clearly looking good for a victory in the 2nd round.
— Silvio Canto, Jr. (@SCantojr) October 8, 2018

A good day for Bolsonaro in Brazil

Down in Brazil, the pre-election day polls were calling for a close race between Mr. Bolosonaro and Mr. Haddad. It turned out to be a different.  In other words, Mr. Bolsonaro almost won the prize in the first round.
So who voted for Mr. Bolsonaro?  How did he do it?  This is from the BBC:

He has won over many Brazilians who think his law-and-order stance will make Brazil safer.
A Roman Catholic, he has also attracted the support of millions of evangelical Christians by saying he will defend traditional family values.
Several prominent Brazilian footballers have endorsed his candidacy including World Cup winner Ronaldinho, Palmeiras midfielder Felipe Melo and Tottenham Hotspur winger Lucas Moura.
Results showed Mr Bolsonaro dominating Brazil’s two biggest states, São Paulo and Rio de Janeiro. However, the country’s north-east showed more loyalty to the Workers’ Party, having benefited from its social policies.

It looks to me that this was a rejection of leftist Lula and his corrupt policies.
It’s not over yet.  Mr. Bolsonaro will face Mr. Haddad in round 2. Let’s see what happens next. It’s clear to everyone that Brazil is a deeply divided country yearning for leadership.
PS:  You can listen to my show (Canto Talk) and follow me on Twitter