Who runs Cuba after Raul?

Down in Cuba, the word is that First Vice-President Miguel Diaz-Canel, a man who looks much like Jose Canseco’s older brother, will take over in February when Raul retires.
There are two points of view going around.
The first one is that Diaz-Canel will be a figurehead who will check with Raul every time he wants to make a move. Or, the second is that he will run to Sr. Trump for the Cuban version of “Nixon goes to China”.
This is from Newsweek:

Cuban President Raul Castro’s enigmatic heir apparent is a rumored Beatles fan who reportedly once grew his hair long during the rise of Western pop music.
He’s pushed for improved internet connectivity on the island essentially frozen in time since the 1960s and advocated for gay rights.
But the chances Miguel Diaz-Canel, Cuba’s vice president who is expected to take the reins from the Castro family in February for the first time in decades, will thaw President Donald Trump’s modern-day Cold War with the Communist-ruled country are slim.
Diaz-Canel, 57, will likely serve in a largely ceremonial role as a Castro puppet controlled by the Communist Party and restricted from opening renewed dialogue with the U.S. even if he wants to, analysts say.
Castro, 86, will be stepping down from the presidency on February 24, 2018, but not from power, said Jaime Suchlicki, director of the Institute for Cuban and Cuban-American Studies at the University of Miami. Castro will remain influential as the Secretary General of the Communist Party, the regime’s most powerful decision maker.
“Diaz-Canel is not one of the top leaders of the Communist Party and he is no significant leader of the Cuban military,” Suchlicki said. “He has no base of support, no popular support, no party support, no military support. So he is going to be subservient to the orders of nine or 10 generals that are running Cuba, including Raul.”

So what happens in Cuba?
My guess is that Mr. Suchlicki is right. Mr. Diaz-Canel is an obvious figurehead who has not been allowed to leave the castle other than when he is standing with Raul Castro at some official event. He has no power or support in Cuba. It’s hard to see where such a figurehead goes to do anything other than carry out Raul’s orders.
P.S. You can listen to my show (Canto Talk) and follow me on Twitter.
Tags: Cuba after Raul Castro To share or post to your site, click on "Post Link". Please mention / link to the My View by Silvio Canto, Jr. Thanks!
Posted by Silvio Canto, Jr. Post Link ---> 10:30 PM 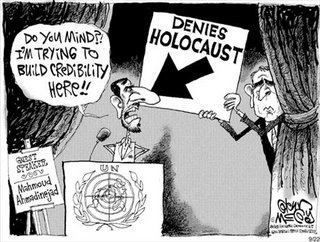 The New Anti-Semitism By Victor Davis Hanson is like the new version of a black and white movie:


"The dangers of this post anti-Semitism is not just that Jews are shot in Europe and the United States - or that a drunken celebrity or demagogue mouths off. Instead, ever so insidiously, radical Islam's hatred of Jews is becoming normalized.
The result is that the world's politicians and media are talking seriously with those who not merely want back the West Bank, but rather want an end to Israel altogether and everyone inside it."

The Jews are simply the first target.  After that, they will come after the Catholics and everyone else.

In their eyes, we are all infidels, whether we believe or don't believe in Christmas.

A few days ago, I found this when I was reading about Romania.
Lieutenant General Ion Mihai Pacepa was the highest-ranking official ever to defect from the former Soviet bloc.
On Christmas Day 1989, Romanian Dictator Ceausescu and his wife were sentenced to death at the end of a trial where most of the accusations had come almost word-for-word out of Pacepa’s book “Red Horizons“.
Along the way, Pacepa met most of the world’s communist leaders, such as Fidel and Raul Castro.
A few years ago, Pacepa wrote “Who Is Raúl Castro? A tyrant only a brother could love“.
This is how Pacepa remembers Raul Castro:

“Raúl was always under the influence — of alcohol and self-importance.
Raúl is generally perceived as a colorless minister of defense, but he has also been the brutal head of one of Communism’s most criminal institutions: the Cuban political police.
I met him in that capacity.  He was cruel and ruthless. Fidel may have conceived the terror that has kept Cuba in the Communist fold, but Raúl has been the butcher.

Pacepa goes on to tell us about the real Raul Castro is:  an assassin and international terrorist.
This is a remarkable article.  It confirms much of what we already knew about Raul Castro.
P.S. You can listen to my show (Canto Talk) and follow me on Twitter.

Yes the national debt is a concern.....suddenly Democrats are talking debt.....did any of these Democrats go on TV and complain about Obama debt? please spare me your interest in the debt issue.....Yes we need to cut spending but an economy growing at 5% would help a lot! pic.twitter.com/djNdEdCwW8
— Silvio Canto, Jr. (@SCantojr) December 18, 2017

The decline of faith in Europe

As we approach another Christmas Day, and a celebration of the birth of Christ, it is very sad to see what is happening in much of Europe.

In short, the churches are empty in Europe.

See Religion takes a back seat in Western Europe:

"Every major religion except Islam is declining in Western Europe, according to the Center for the Study on Global Christianity at the Gordon-Conwell Theological Seminary in South Hamilton, Mass.
The drop is most evident in France, Sweden and the Netherlands, where church attendance is less than 10% in some areas.
Last month, Pope Benedict XVI lamented the weakening of churches in Europe, Australia and the USA.

"There's no longer evidence for a need of God, even less of Christ," he told Italian priests.
"The so-called traditional churches look like they are dying."

Unfortunately, a society without children won't pass on its traditions. In 50 years, white Europeans will be "rare species" in much of the continent.

Good news from the US economy!

The US economy continues to outperform the naysayers and that's the best news!   This is from news reports: