Trump and Biden plus Tommy Lasorda and more stories

What were they thinking in Georgia? 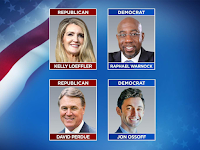 The 2020 Georgia runoffs were a disaster.  I guess the only good news is that Senator Warnock is up for reelection in 2022.  Let's hope that Georgians get it together by then.
I agree with Liz Peek:
The politics of envy and grievance – of class warfare and racial hostilities -- have won out over messages of hope, prosperity and opportunity for all. How could this happen?
Simply put, Republicans did not turn out in the numbers needed to beat an energized Democrat campaign. A campaign that was funded by massive contributions from liberals across the nation, spurred by dreams of a progressive future; a future driven by the prospect that taking control of the senate would allow them, as Senate Minority Leader Chuck Schumer said, to "change the world."
What a disgrace specially given the success of the Trump administration in bringing jobs to the African American communities.   Also, a further disgrace given the state of urban America under Democrat control.
As I understand, a large turnout from the African American community put two Democrats in the US Senate.  Sadly, not one of these Democrats has a solution for what ails the people who put them in office.
P.S.  You can listen to my show (Canto Talk).
Posted by Silvio Canto, Jr. Post Link ---> 4:21 AM