Thursday's show: The complications of DACA plus Jim Acosta of CNN and Senator Flake of Arizona

Thursday's video: DACA is more than Democrats vs Republicans

The debate over DACA is really border security and rural vs urban areas....it is not about party...

The Jim Acosta Show, or the story of a journalist on a mission to argue with President Trump, took its act to the Roosevelt Room.
During a photo-op session with visiting President Nursultan Nazarbayev, Jim Acosta decided to make noise.  He started screaming questions about whether the president wants immigrants only from white countries.
It was too much, and Jim Acosta of CNN got thrown out:

President Trump kicked CNN star Jim Acosta out of the Oval Office Tuesday after the network’s senior White House correspondent badgered him with racially charged questions.
Acosta has made a habit of grandstanding and interrupting when Trump and his surrogates are available to the media.  Tuesday was no exception, as Acosta yelled, “Mr. President[]” three times before finally getting Trump’s attention.
“Did you say that you want more people to come in from Norway?  Did you say that you wanted more people from Norway?  Is that true Mr. President?” Acosta frantically shouted.
“I want them to come in from everywhere … everywhere.  Thank you very much everybody,” Trump responded as Acosta continued to bark questions.
“Just Caucasian or white countries, sir?  Or do you want people to come in from other parts of the world … people of color[?]” Acosta shouted.
Trump then pointed directly at Acosta and simply said, “Out!”

Acosta then went out and said this is what happens in other countries.  Really, Jim?
Let me share a couple of thoughts about this silly man.
First, thank God that Jim Acosta never did this to President Obama.  His colleagues would have called him rude and obnoxious.
Second, maybe Jim Acosta wants to replace Rachel Maddow and do this every night.
Why not?  Rachel and Jim back to back on MSNBC!
PS: You can listen to my show (Canto Talk) and follow me on Twitter.
Posted by Silvio Canto, Jr. Post Link ---> 10:30 PM

What was the purpose of the so called 100 hours?

It was all about feelings rather than legislation.

It was about catching headlines and avoiding the real issues, such as entitlements, the war on terror, Iran, Iraq and immigration reform.

“Of the six items they promised to approve in the first "100 hours" of a new Democratic Congress, three have met resistance from the Democratic Senate, at least one appears likely to be vetoed by President Bush and two others have come under heavy criticism from outside groups.” 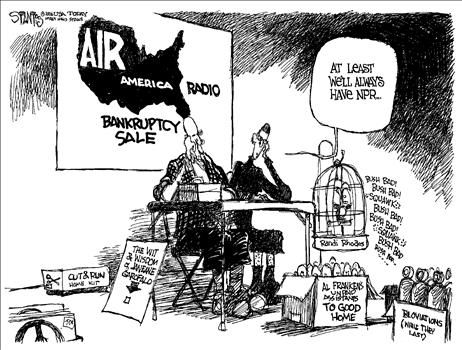 Based on recent audience ratings, Air America is down to its last drop.

Air America made one huge mistake. It invested itself in every stupid version of Bush bashing. In the end, Air America was predictable and silly. How many times can you hear that Pres. Bush is a moron who stole the election? Even liberals tuned out Air America!

So good-bye Al Franken. Pres. Bush will be around a lot longer than Air America. How is that for sweet justice?
Posted by Silvio Canto, Jr. Post Link ---> 2:00 PM


Pres. Bush's approval ratings are from 31% to 41%. This is a dangerous range for a President facing a mid term election and 30 months in office.

What has gone wrong?

Pres. Bush has done a marvelous job on the war on terror. He saw the threat and responded swiftly. On Iraq, he understood the big picture, the same big picture that John Kerry saw until Howard Dean built a 20 point lead in New Hampshire.

On the economy, the numbers speak for themselves.

On cultural issues, Pres. Bush has consistently nominated strong judges and has supported a constitutional amendment to define marriage between a man and a woman.

On immigration, the President is missing in action. I don't know why but he is. It is the single biggest issue driving his poll numbers down.

Listen to me Pres. Bush. You can still turn your fortunes around. You can prevent Dem. gains in November.

But it starts with immigration.

Shut down the border. Put troops if necessary. Enforce labor laws. Make it clear that we are a nation of immigrants but also a nation of laws.

Get in the game Mr. President and the base will rally around you one more time.
Posted by Silvio Canto, Jr. Post Link ---> 1:30 PM