We will discuss the border crisis with George Rodriguez 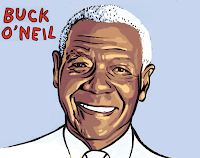 We are celebrating Black History Month and I hope that we remember John Jordan O’Neil Jr. known to most us as Buck O’Neil.

Most of us learned about Buck O’Neil when he was a contributor to “Baseball,” the PBS documentary that was shown ironically the year that the World Series was cancelled in 1994.

I loved Buck’s stories and the many bits of wisdom that he shared of the Negro Leagues.  He had played with all of the legendary players, from Satchel Paige to Josh Gibson.

On the field, Buck was a first baseman and later manager of the Kansas City Monarchs, the legendary team of the Negro Leagues.

Off the field, Buck was a smash and became a great ambassador for baseball and author of some wonderful lines:

▪ Hug everybody you can, especially the pretty women.

▪ Drain the bitterness out of your heart. My daddy was a good man. He paid his taxes. He lived a good life. But he couldn’t vote. He was not bitter, though…

▪ Sing a little every day.

▪ Don’t smoke any of those leaves or put anything up your nose.

▪ Tell people you love them.

▪ Listen to old people tell stories. They might teach you something.

▪ Do a little showboating every now and again in your life. Remember, it was the so-so ballplayers that came up with the word “Showboating.” They were jealous. If you have something to show, go ahead and showboat a little bit.

Buck came to Dallas often.  I listened to a radio interview a few years before his death in 2006.  A caller asked him if he was bitter for not playing in the majors.  He said no and added that bitterness is toxic anyway.

Over the last year, we’ve been hearing a lot about Black Lives Matter and systemic racism.  I won’t deny history.  At the same time, it’s people like Buck O’Neil who lived under real racism who remind us:  “Don’t let anger boil up inside you. There’s too much anger out there already. Yeah. Too much anger.”

Yes, there is too much anger and too few men like Buck O’Neil.