Democrats in Texas plus President Biden in Tulsa & the infrastructure bill

Wednesday’s video:
Democrats insane in Texas
Click to watch:
P.S.  You can listen to my show (Canto Talk).  If you like our posts, click send, and drop a dime here.
Posted by Silvio Canto, Jr. Post Link ---> 10:04 AM

And now Peru and Chile 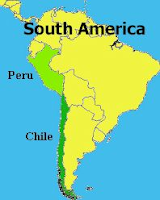 A couple of our South American neighbors shared some bad COVID news over the weekend.

In Peru, the COVID death figures were recalculated up, according to news reports:

Peru on Monday more than doubled its official coronavirus death toll, becoming the country with the highest Covid-19 mortality per capita anywhere in the world.

The government said it had raised the count from 69,342 to 180,764 on the advice of a panel of health experts, which found there had been an undercount.

With the adjustment, Peru now has the highest coronavirus mortality per capita of any country, with 5,484 deaths per million inhabitants, according to an AFP count.

The country of about 33 million people previously ranked 13th in the world with 2,103 deaths per million, according to AFP's data.

For some perspective, Peru and the state of Texas have roughly the same population.  Texas has 51,000 deaths and Peru 180,000!

My Peruvian friends believe that the problem is an overwhelmed hospital system in Lima, the capital, and rural areas where the virus spread out of control.

Over in Chile, the news is more depressing.   It appears that the Chinese vaccine did not work:

Across Chile—which has mounted one of the world’s most rapid vaccination campaigns using the vaccine made by Chinese drugmaker Sinovac Biotech Ltd.—health authorities are scrambling to deal with a surge in new infections and deaths.

More than 7.6 million people, half of Chile’s adult population, have already received at least one vaccine dose, most made by the Chinese drugmaker, making the country a real-world testing ground for a vaccine that Beijing is supplying to countries across the developing world.

The problem, public-health officials say, was that people in general overestimated the effectiveness of the vaccine after only one of the two recommended doses and moved to ease up on pandemic-control restrictions too soon.

What other country got the Chinese vaccine?   I hear that Brazil did but has now switched to other versions.

All over the world, we see challenges with COVID, from India to now Peru and Chile.  At the same time, we see the US doing better and moving back to normal as much as possible.  It confirms how effective President Trump was in getting the vaccines out and how great our health care system is.