We look back at elections as we wait for 2020 results

Maybe Biden will tell us after the election 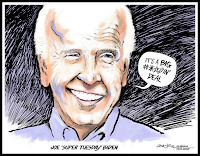 Back in February, I appeared on the local Univision channel and was convinced that a strong economy would reelect President Trump.   Little did I know, or anybody know, that we’d be talking about something called “COVID” on election day.

On Sunday afternoon, I caught a bit of former VP Biden.  He was honestly hard to understand because of the mask.  I read the transcript and it confirmed that he said nothing.

Biden warned of a “dark winter.”  Then he went off on blaming President Trump for 220,000 deaths.  I guess that a president-elect Biden will turn on a switch and make the virus go away.   Of course, he will listen to the science, whatever that means.

In fact, the economy is coming back in large part because of how strong it was in March when the you-know-what-hit the fan.  President Trump rallied the medical community to develop a vaccine and therapeutics. He turned on our manufacturing capabilities to produce medical equipment and supplies.  It was an impressive display of leadership.

So what would a President Biden have done?  He would have listened to the scientists.  Which ones?  Maybe he will tell us after the election.

I have two memories of Bob Welch's career:

1) He won 27 games with the 1990 Oakland A's, one of the best teams ever to lose the World Series.  They were swept by the Cincinnati Reds.

2) Game 2 of the 1978 World Series.  Welch, a rookie, was brought in to face Reggie Jackson of the Yankees with two outs in the top of the 9th.  It was a classic struggle and Welch eventually blew a fastball past Reggie.

Welch won 211 games and was a very consistent starter with the Dodgers & A's.