Chicago has sunk a lot since our first visit there 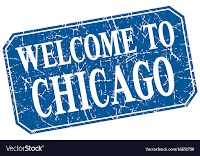 Back in 1967, our family lived in Wisconsin and drove to Chicago two or three times a year.  Our destination was a Cuban store where my parents bought foodstuffs, books, LPs, and a birthday present for whoever was celebrating soon.  I will never forget the Cuban who owned the store telling my father over coffee that Chicago's Mayor Daley was like Batista, the Cuban strongman of the 1950s.  He said Daley protects your streets, lets you make money, and is nasty to troublemakers.  I don't know if that was a good comparison, but we got his point about an orderly city.

That was then, and this is now.  My father's friend would not recognize the city today or understand how the voters could continue to elect such incompetent leaders like the current mayor.

Up in Chicago, Mayor Lightfoot got some bad news from the police.  They had a "no confidence vote" on the mayor, and it looks like they have zero of it.  This is the story:

Chicago's Fraternal Order of Police issued a vote of no-confidence in Mayor Lori Lightfoot Wednesday, citing poor work conditions and the cancellation of a march for fallen officers due to the coronavirus pandemic.

The vote by the police union, as well as police Superintendent David Brown and First Deputy Eric Carter, was unanimous among as many as 200 active and retired rank-and-file officers, the Chicago Tribune reported.

Reasons cited for the move reportedly include officer burnout and the department's decision to cancel off days for cops on several occasions — as well as a move from 8 ½-hour shifts to 12-hour work periods in preparation for possible unrest in the city.

It's symbolic or non-binding but still awful news for one of the worst mayors in the U.S.

The vote follows her announcement that she'd be giving preference to journalists "of color."  Apparently, she does not like that most of the press corps in Chicago is white.

What can I say?  Shame on all of those journalism schools for graduating so many whites.

In a normal time, such a vote or racist remark would have led to a resignation.  In a normal time no head case like Lori Lightfoot would have been taken seriously as a candidate for anything, especially mayor of a large city.

I'm left with memories of a time when going to Chicago was fun and we didn't have a shootout every weekend.