Vicente Fox sticks his nose into the El Chapo case 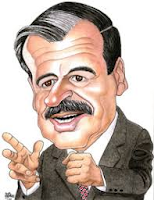 Vicente Fox got off to a great start by winning the 2000 presidential election and putting an end to 70-something years of one-party rule in Mexico.   It was historic and very promising but did not quite work out as most Mexicans anticipated.  To be fair, the Mexican swamp is a bit more complicated than ours.

Since leaving office in 2006, President Fox has found a way of sticking his nose in everything, especially getting into fights with President Trump over the border wall.

He is back in the news with a rather interesting tweet about Emma Coronel Aispuro, El Chapo’s young pretty wife.   By the way, how do they say “trophy wife” in Spanish?  I’m not sure, but Emma fits the description.

“El Presidente” Fox tweeted about the arrest and a lot of Mexicans are wondering what in the world he’s talking about.  He wrote in Spanish something like this:  “Don’t worry, Emma.  The president will come to the rescue!!”

What’s that supposed to mean?  President Lopez-Obrador is going to intervene to get her out of the U.S.?   I think that he was referring to the 2020 arrest of a former Mexican defense secretary, retired Gen. Salvador Cienfuegos.  He was accused of drug trafficking and money laundering, the same as El Chapo’s wife.

I asked a couple of Mexican friends south of the border and got a couple of  interesting responses:

First, Vicente Fox is just looking for attention.  He wants an interview with CNN; and,

Second, El Chapo just wants his pretty wife in prison so he can spend more time with her.

Time will tell but Mexican politics just gets more and more interesting all the time.