On Thursday morning, Kellyanne Conway told Fox News that the Democrats did not have the votes to impeach President Trump.
A few hours later, they proved her right by voting for a formal investigation rather than impeachment.
My guess is that this is why “no impeachment” vote took place.  No impeachment was started this week no matter what they call it or how it gets reported.
According to a recent poll, impeachment may end up helping President Trump:

Democrats took a tremendous gamble by formally voting for an impeachment inquiry into President Donald Trump on Thursday. While polls suggest Americans support the inquiry, the general public is divided on whether or not Trump should be impeached and removed from office. Those in key swing states are more likely to oppose impeachment and removal, suggesting that the impeachment battle may help Trump’s reelection in 2020.
“We’ve known for a long time that everybody in California and New York want Trump to be impeached, they’ve wanted that since the day he came into office,” an anonymous Trump campaign official told The Hill. “But in these states where the election is really going to be fought, we’re seeing that voters oppose impeachment, and there’s an intensity to that opposition.”
Indeed, a New York Times/Siena College poll released Wednesday showed that voters in six key swing states oppose impeaching and removing President Trump, 52 percent to 44 percent.

A poll is a poll and it could be right or wrong. However, the fact that Speaker Nancy Pelosi did not put a real impeachment vote on the floor confirms that they may not really have the votes.
PS: You can listen to my show (Canto Talk) and follow me on Twitter.
Posted by Silvio Canto, Jr. Post Link ---> 6:49 AM 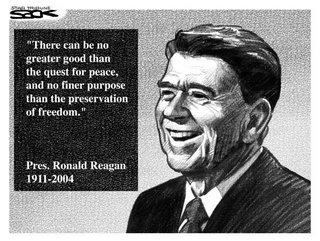 It's critical to remember Reagan during these divisive times.    After Watergate, many young Republicans were demoralized. It did not help that Carter won in '76.

Of course, it was not easy on Reagan. They hated him in Europe. Does "cowboy and moron" sound familiar? Don't you remember the anti-Reagan marches in Europe?

Reagan did not play the poll game. He did not read polls to tell him what to believe or say. In other words, Reagan was not Kerry or Clinton!

As another election approaches, I always go back to Reagan for inspiration and confidence.

This is Reagan's party and we should behave like it!