Tuesday's show: The Supreme Court in the news plus other stories

Tuesday's video: A word about The Supreme Court

The Supreme Court didn’t take a position on DACA.....wants the appeals courts to have their say. The JANUS decision coming up in June will test public sector unions and membership:

The Democrat memo leaves us with a few questions

The Democrats are all over the TV shows explaining their “memo” and saying it proves that the GOP-Nunes memo was nothing to speak of.
Yet the Democrat memo misses the point or the central theme: that people on the Democratic side used intelligence for political reasons.
The memo confirms that the FBI used an opposition research document to go after Carter Page.
It also confirms that the Clinton campaign paid for it.  The memo disputes only the degree to which the bad dossier was used.
It’s like a defense attorney saying his client indeed robbed a bank but did not steal as much money as claimed.
This is from Monday’s Wall Street Journal editorial:

The Democratic memo devotes considerable space to smearing the hapless Mr. Page, as if he’s some kind of master spy and the Rosetta Stone of the Trump-Russia story.  Yet no one has offered proof that he colluded with the Russians, and he hasn’t been indicted.
Democrats also make much of the fact the FBI started looking into the Trump campaign in July 2016 but didn’t receive “Steele’s reporting” until “mid-September.”  So what?  The issue here is the fairness and honesty of the FISA application in late October (not the investigation), and what matters is that the FBI didn’t move on the FISA application until after it received the dossier.
***
The only definitive evidence of political “collusion” so far is that the Clinton campaign paid Mr. Steele to troll his Russian sources for dirt on Donald Trump.  The FBI then used this dirt as a reason to spy on Mr. Page and anyone he was communicating with.  Imagine how the press would be playing this story if the roles were reversed[.]

I think that we know how the press would be playing this if the roles were reversed.  Can you say “Son of Watergate”?
After reading both memos, I come to the conclusion that the Democrats are trying to protect somebody.  Whom?  My guess is President Obama, who probably was convinced that Mrs. Clinton would win and no one would ever hear about this.
PS: You can listen to my show (Canto Talk) and follow me on Twitter.

The Supreme Court DID NOT say anything about DACA

The Supreme Court DID NOT say anything about DACA.....it simply said that the appeal process should continue.....This is not a victory for DACA or Democrats.....it is all about process and nothing more.........
— Silvio Canto, Jr. (@SCantojr) February 27, 2018 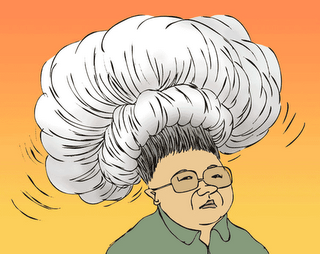 Here it is. The North Korean look. Add some glasses and you can look like Kim!
Posted by Silvio Canto, Jr. Post Link ---> 9:30 PM

Thank you to FedEX for keeping politics out of its marketing decisions........US corporations should stay out of politics over the NRA or they will suffer a backlash......just ask CBS and the Grammy's ratings........or look at Delta and the Georgia legislature.........
— Silvio Canto, Jr. (@SCantojr) February 27, 2018

Big win for the border wall

Rasmussen has President Trump at 50% approval in the 14th month of his presidency.....President Obama was at 43% at the same time.    The bad news is that it's only a poll.   The good news is that Rasmussen has been very accurate over the last few years.
Posted by Silvio Canto, Jr. Post Link ---> 7:30 PM