The Iran nuclear deal a year later with Richard Baehr

Where is the black Democrat telling Colin Kaepernick to shut up? 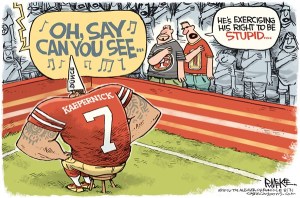 (My new American Thinker post)
The whole Kaepernick anthem affair confirms two things:
1) He is no longer making headlines by throwing TD’s; and worse,
2) He does not have a clue of what repression really is.
My friend Humberto Fontova told me about Kaepernick holding a press conference wearing a T-shirt with a picture of Fidel Castro. It explained everything that I needed to know about this clown named CK who can’t play QB anymore.
Furthermore, it also proved that Kaepernick does not even understand what is going on in U.S. cities, especially as it relates to the minorities that he is suddenly so worried about. Maybe he should get out of his mansion and spend a few days living in the inner city.
As Heather McDonald pointed out:

Blacks are killed by police at a lower rate than their threat to officers would predict. To cite more data on this point: in 2013, blacks made up 42 percent of all cop killers whose race was known, even though blacks are only about 13 percent of the nation’s population.
Less than one-third of all homicides by police involve black victims. Moreover, there is a huge, unacknowledged measure of support for the police in the inner city: “They’re due respect because they put their lives every day on the line to protect and serve. I hope they don’t back off from policing,” a woman told me on the Staten Island street where Eric Garner was killed. (This was two nights before Officers Wenjian Liu and Rafael Ramos were assassinated in Brooklyn.)

It ain’t happening, Colin. You are reading our society’s problems as poorly as you do the defenses intercepting your passes or the receivers that you are constantly overthrowing!
Here is the worst part: His message of black victimology was unchallenged. No one in the Congressional Black Caucus stood up and called Collin out.    No one in the Democrat Party defended the police from the outrageous lies that Kaepernick said.
In the meantime, Chicago has recorded 487 homicides and more than 2,800 people shot so far this year. My guess is that the people in those communities are happy to see “the blue team”!
At the end of the day, who cares whether Kaepernick salutes the national anthem. Let him sit down! However, he has no right to attack the integrity of our police officers or pretend to be enlightened by wearing a Fidel Castro T-shirt!
P.S. You can listen to my show (Canto Talk) and follow me on Twitter.