Wednesday’s video:
Still talking about expanding the court
Click to watch.......
P.S.  You can listen to my show (Canto Talk).  If you like our posts, click send drop a dime here.
Posted by Silvio Canto, Jr. Post Link ---> 2:30 PM 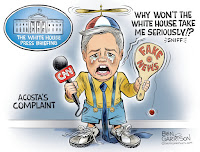 Jim Acosta does not have President Trump to kick around anymore. Nevertheless, he is still as crazy as ever. Yesterday, he said that Senator McConnell would end the filibuster if he could. What’s wrong with that? Well, it’s wrong; totally wrong.

Senator McConnell has never supported killing the filibuster. In fact, he fought back when President Trump suggested the idea back in 2017:

Asked if Republicans would nix the 60-vote filibuster to allow legislation to pass by a simple majority, McConnell told reporters, “That will not happen.”

“There is an overwhelming majority on a bipartisan basis not interested in changing the way the Senate operates on the legislative calendar” on legislation, McConnell said during a weekly press conference.

Trump tweeted on Tuesday morning that voters should either elect more Republicans or get rid of the 60-vote requirement needed for ending debate on legislation.

“The reason for the plan negotiated between the Republicans and Democrats is that we need 60 votes in the Senate which are not there! We either elect more Republican Senators in 2018 or change the rules now to 51%. Our country needs a good ‘shutdown’ in September to fix mess!” he wrote in a series of tweets.

Acosta’s rant is just the latest example of CNN’s collapse. Apparently, no one at CNN has corrected Acosta or put up a counterpoint of view. Did someone say that you’re entitled to your opinion but not your facts?

What makes Acosta’s rant even more ridiculous is that he covered President Trump. In other words, Acosta had to know that the then-Majority Leader and President had different points of view on the filibuster.

CNN so much airtime and so much nonsense!