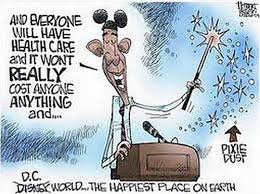 The AHCA, also known as Obama Care, was sold to the public on the basis that you could keep your own policy and premiums would be more affordable.

People like me were told to "chill out" and stop seeing ghosts and death panels.  We were told that the new law would have no impact on my family coverage. ("If you like your policy you can keep it")

The second point was that the AHCA would make health insurance more affordable for families.

These two assumptions were never challenged by the media.  They were accepted as fact by a media, either too lazy to read the bill or maybe too partisan to blow it up before the reelection.

No matter what, the US public was not well served by a media unwilling to challenge the administration's assumptions.  I would also argue that the Obama administration would have benefited by a more adversarial coverage.  They may have prevented some of the "glitches" and been very prepared for the "roll out".

Today, ObamaCare faces huge problems and the website is just the beginning.

Michael Boskin looks ahead and sees it a lot more problems down the road, and we are not talking "glitches":

"The "sticker shock" that many buyers of new, ACA-compliant health plans have experienced-with premiums 30% higher, or more, than their previous coverage-has only begun.
The costs borne by individuals will be even more obvious next year as more people start having to pay higher deductibles and copays.
If, as many predict, too few healthy young people sign up for insurance that is overpriced in order to subsidize older, sicker people, the insurance market will unravel in a "death spiral" of ever-higher premiums and fewer signups.
The government, through taxpayer-funded "risk corridors," is on the hook for billions of dollars of potential insurance-company losses. This will be about as politically popular as bank bailouts.
The "I can't keep my doctor" shock will also hit more and more people in coming months.
To keep prices to consumers as low as possible-given cost pressures generated by the government's rules, controls and coverage mandates-insurance companies in many cases are offering plans that have very restrictive networks, with lower-cost providers that exclude some of the best physicians and hospitals.
Next year, millions must choose among unfamiliar physicians and hospitals, or paying more for preferred providers who are not part of their insurance network.
Some health outcomes will deteriorate from a less familiar doctor-patient relationship."


On another front, "latino enrollment" in California is not good, according to a LA Times story I saw over the weekend.

Maybe the Obama administration needs to hire Shakira, the Colombian beauty, to do a little ObamaCare promotion.  At least, the Latino young guys will listen to her.  They may not enroll but they will give her "thumbs up'" at the "si se puede" rally!

2014 and ObamaCare look like a multi-car train wreck to me.  The first car is coming off the tracks and another dozen cars will follow!

P. S. You can hear my chat with Richard Baehr of American Thinker about the media & follow me on Twitter @ scantojr.