Trump and the special counsel plus other stories of the day

We will look at some of the stories from the front pages.......another journalist killed in Mexico........the growing death totals south of the border.........President Trump and President Santos of Colombia talk about Venezuela.....we may see a new FBI Director very soon......Special Counsel will oversee the Russia angle in the 2016 election......and Jose Marti was killed on this day in 1895..........plus other stories....

The other Mexico story

Over the years, I’ve met and followed the work of Mexican journalists covering the cartels. They are often people who started their own magazines or blogs. They are brave and will write a lot that the cartels do not want the world to hear about.
Yesterday, we learned of another casualty in Mexico:

A veteran journalist who had chronicled the bloody conflicts among rival drug cartels in his home state, Sinaloa, and the culture of violence they inflicted on the broader society, was killed by gunmen on Monday near the newspaper that he had co-founded, the authorities said.
The journalist, Javier Valdez Cárdenas, 50, was in his car when he was intercepted by the killers, according to Ríodoce, a weekly he founded with Ismael Bojórquez in the city of Culiacán in 2003.
At least 104 journalists have been murdered in Mexico since 2000, while 25 others have disappeared, according to the press freedom organization Article 19.
The death of Mr. Valdez, who had shared prizes from Columbia University and the Committee to Protect Journalists, raises pressure on the government of President Enrique Peña Nieto to address the killings more forcefully.

Yes, it would be nice if the Pena-Nieto administration would address the killings, but what can he really do?
Journalists like Valdez-Cardenas are out in the battle zone daily. They are the ones who dig up the stories about killings, corruption, and everything else that makes up this bloody story south of the border. They usually do their work without bodyguards or expose their families to torture and late night threatening phone calls.
So the killing goes on south of the border.
The LA Times ran a story two months ago about the massacre south of the border:

The Mexican government always reminds us that the violence is not always cartel-related but experts say that half of them probably are. They also always say that tourist sectors are generally free of violence and that’s true of the Caribbean resorts.
Nevertheless, Mexico is not the country I recall living in some years ago.
P.S. You can listen to my show (Canto Talk), (YouTube) and follow me on Twitter.
Tags: Mexico violence and journalists  To share or post to your site, click on "Post Link". Please mention / link to the My View by Silvio Canto, Jr. Thanks!
Posted by Silvio Canto, Jr. Post Link ---> 7:00 AM 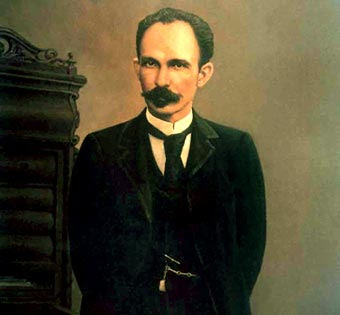 We celebrate Jose Marti's death.  It's an important date for most Cubans.

How do we remember Jose Marti or live up to his ideals?

You can do two things.

First, you can support Cuban bloggers and dissidents.  They are persecuted by the Castro dictatorship for posting their thoughts online. (Clipping Castro one blog at a time)

Second, don't legitimize the Castro brothers by treating them like elected leaders or representatives of the Cuban people.    They don't deserve it.

Like always, MARY ANASTASIA O'GRADY is right on target.

She recently wrote Cuba Doesn't Belong in a Democratic Club :


"The Cuban regime is at odds with these ideals and in January 1962 the OAS expelled it, resolving:
"That adherence by any member of the Organization of American states to Marxism-Leninism is incompatible with the inter-American system and the alignment of such a government with the communist bloc breaks the unity and solidarity of the hemisphere."
In other words, because the Castro government had murdered and imprisoned dissidents, done away with free elections and economic and civil liberties, and allied itself with communism, Cuba was deemed unfit for OAS membership."

On one hand, we hear Latin leaders complain that no one takes them seriously. On the other hand, they pander to their leftist populations by embracing the Castro brothers.

Wouldn't it be nice if Latin leaders demanded the release of Cuban political prisoners, a free press and open elections?

Sitting down with dictators like Fidel and Raul Castro?  Jose Martin would say no!