The week in review with Bill Katz the editor of Urgent Agenda 09/29 by Silvio Canto Jr | Politics: 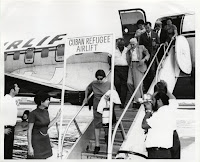 This month in 1965, the Castro regime announced that Cubans were free to leave the island. It happened about a year after our family and many others had left Cuba via Mexico or Spain.  The problem is that Miami-Havana flights were canceled after the Cuban Missile Crisis of 1962.  So we had to opt for the more complicated and costly trip to Mexico or Madrid.  Also, the flights to Mexico City or Madrid were less frequent.  As I recall, the flights to Spain were weekly and maybe twice a week to Mexico.
Once the Miami-Havana flights were restarted,  “the Freedom Flights” or "Vuelos de libertad" began. Between 1965 and 1975, ten flights a week brought approximately 300,000 Cubans to the U.S.
Why did Castro do it? Some say that Castro got rid of many opponents and that’s true. More importantly, it was a “brain drain” and many hard working and talented people left Cuba.   Also, the refugees generally came as families and were generally received by their relatives in Miami.
Last but not least, it changed Miami from a sleepy winter resort to a vibrant city that became the capital of Latin America.
And best of all, it was done legally and orderly.
P.S.  You can listen to my show (Canto Talk) and follow me on Twitter.