The week in review with Bill Katz, the editor of Urgent Agenda 07/26 by Silvio Canto Jr | Politics:


Guest: Bill Katz, the editor of Urgent Agenda.......China vs The US and its going to get worse......Seattle and Portland on fire and the local leaders stand by.....Wall Street Journal said no the 'wokes'....A&E loses half of its audience....The Kid vs the Media and the Kid is winning.........
and more....click to listen:

Do Italian-Americans get a vote on removing Columbus?

According to a profile of Italian-Americans done following the 2000 census, there are over 15 million Americans of Italian descent or 6% of the population.  Shouldn’t 15 million Americans have something to say on whether a Columbus statue should be removed?
Up in Chicago, Mayor Lightfoot ordered the Lincoln statue in Grant Park and Little Italy removed.  It was done after midnight, and the statue was sent to an unknown location.
According to Mayor Lightfoot, she did it to stop the violence, or something like that:

We took this step in response to demonstrations that became unsafe for both protesters and police, and to efforts by individuals to independently pull the Grant Park statue down in an extremely dangerous manner.

Let’s translate the mayor’s pathetic words.  She gave in to a mob that won’t stop demanding this or that until a local leader draws the line and arrests people who think that they can do whatever they want.
Some Italian-Americans were not happy.  For many of our Italian American friends, Columbus is part of their heritage.  After all, wasn’t the Columbus statue in Little Italy?
It’s obvious that Democrats are unwilling to enforce the law or defend all of their constituents.  Hopefully, Italian-Americans will remember that the next time they vote.
PS: You can listen to my show (Canto Talk) and follow me on Twitter.
Posted by Silvio Canto, Jr. Post Link ---> 6:05 AM

My chat about Moncada 1953 with Jorge Ponce 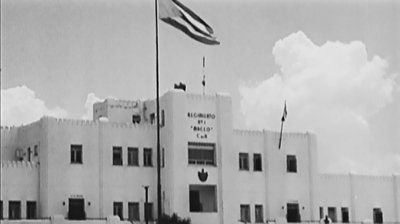 A few years ago, we discussed Moncada 1953 with Jorge Ponce, Cuban American writer and contributor to Babalu Blog.

You can hear the show here: