Everybody was talking Madden in Mexico 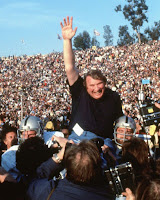 We just flew home from a vacation in Mexico.    Unlike the thousands who cross the border on a daily basis, my Mexican born wife (legal resident) and me (Naturalized U.S. citizen) had to take a COVID test 24 hours before the flight home.  Thankfully, we are negative and the testing facility was rather well run.   We did not have to wait long as I hear is happening up here.

It's weird, but my two biggest fears a few days ago were a positive COVID test and staying in Mexico plus a flight cancellation.   So my wife kept checking her phone and gave me the best news:   "El vuelo no esta cancelado" or the flight is not cancelled.  Can't tell you how good that sounded as we were fighting the incredible traffic jam going to the airport.

Yes, there was a lot of controversy about the virus.

We attended a huge December 24th family gathering and three issues were forbidden by a family decree distributed by email:   religion, the Mexican president, or COVID.

I didn't understand the one about religion but the other two are hugely controversial.   At one point, a family member said:   "You think you guys are polarized in the U.S. check out Mexico."  Another one said something about a crazy Mexican Fauci but not sure who he was talking about.

What do the guys talk about when religion, COVID, and the Mexican president are off the table?   Can you believe John Madden?  It turns out that the other men at the meeting were very fond of the late Raiders' coach and NFL analyst.

On the flight back, I read this great article by Christopher Jacobs:

For most of the 1970s, football fans knew John Madden as the coach who “couldn’t win the big one.” Hired as coach by Raiders owner Al Davis at age 32, Madden fielded successful teams throughout his tenure; after all, he won more than three-quarters of the games he coached. But circumstances always seemed to conspire against Madden and his teams, as when the Pittsburgh Steelers used the last-second “Immaculate Reception” to beat his Raiders in 1972.

Two years after Madden’s Raiders won Super Bowl XI over the Minnesota Vikings -- finally removing the proverbial monkey off his back -- he shocked the football world by retiring at the young age of 42.

Then he went into the TV booth and became of the face of CBS' coverage.

Like most of the guys at the aforementioned party, I remember Coach Madden losing all of those post season games, including the one 1972 crazy finish against the Raiders.  There were several Raiders' fans in the crowd who reminded me that the referee missed the play and replay would have reversed the call.   I don't know about that but I guess that the Raiders were hugely popular south of the border too.   And his work on TV was very popular too because many guys catch the game in English by cable TV.

So rest in peace, Coach.  Talking about Madden had us chatting about something other than President Lopez-Obrador, who turns people on or off, not much different than President Trump does up here.

Hope you had a good Christmas holiday and that your food was as good as what we had.

Who knew that Coach Madden would keep us away from religion, the Mexican president, and COVID?