Beto and guns plus AOC in South Texas & 1982 inflation

Can someone give PM Trudeau a pair of glasses? 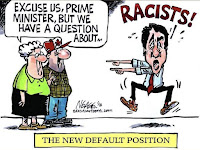 Up in Canada, PM Justin Trudeau can't help himself.  He is gone "full woke" on the truck drivers and consequently encouraged more drivers to get on their trucks to Ottawa.  This is an example from the New York Post:

Trudeau took aim at the thousands of anti-vaccine mandate protesters who have staged demonstrations in Ottawa for the last two weeks, declaring on Monday night: “It has to stop.”

“This is a story of a country that got through this pandemic by being united -- and a few people shouting and waving swastikas does not define who Canadians are,” Trudeau told lawmakers during an emergency debate.

Trudeau’s remarks appeared to dismiss concerns from conservative lawmakers who have warned that the hundreds of trucks that have been blocking major thoroughfares in Ottawa shed light on how divided the country has become.

Trudeau added that the protesters were “trying to blockade our economy, our democracy, and our fellow citizens’ daily lives.”

Wonder when he will start referring to the whole thing as Canada's January 6th?  Leslie Eastman of Legal Insurrection has a great summary of how the media has gone "Tea Party" crazy with the events in Canada.  It looks like the more that the drivers are attacked the more they double down in Ottawa.

The prime minister's problem is that his words don't match the reality on the ground.  These drivers are not terrorists nor a threat to democracy.  On the contrary, these are people who feel that government is not listening to them.

What if PM Trudeau had sat down with some drivers, listened to them, and shown some respect?  Maybe this whole thing could have settled in an orderly fashion.

Don't expect a quick resolution to the situation up north.   You can blame PM Trudeau for pouring gasoline onto the fire and a media that thinks every critic is a threat to democracy.

Benjamin Ambrosio Oglivie was born in Panama on this day in 1949.

Happy Birthday Ben Oglivie!
P.S.  You can listen to my show.  If you like our posts, please look for ”Donate” on the right column of the blog page.

We say happy birthday to Sergio Mendes, a very talented Brazilian band leader, who was born in Rio de Janiero on this day in 1941.

Mendes recorded my favorite cover of a Beatles' song.   His version of "Fool on the hill" is great.  It is creative and sounds great because it is Sergio Mendes rather than someone trying to imitate The Beatles.

Here is the Mendes' unique arrangement!
P.S.  You can listen to my show.  If you like our posts, please look for ”Donate” on the right column of the blog page.
Posted by Silvio Canto, Jr. Post Link ---> 12:02 AM