Friday's show: The attacks on our traditions with Frank Burke, author & businessman

Friday's show:
The attacks on our traditions with Frank Burke,
author & businessman

Friday's video: Don't shut down the government over Christmas

Friday's video:
Don't shut down the government over Christmas

AMLO does a Trump 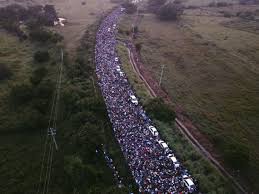 I got a call from a Mexican friend telling me about President Lopez-Obrador and the caravans.
Well, this is the news my friend brought to my attention:

Mexico’s top security official said Wednesday the government will close off illegal entries at its southern border with Guatemala, but didn’t say how the country plans to do it.
Interior Secretary Olga Sanchez Cordero also said the migrant caravans that crossed the southern border in October “is no longer an issue.”
“Do you know why it is no longer an issue? Because in five days this administration solved the issue, five days,” she said, referring to the first week since President Andres Manuel Lopez Obrador took office Dec. 1. “The United States was impressed.”
The new administration has mobilized material and equipment to improve conditions at the migrants’ shelter in the northern border city of Tijuana, but problems continue because the Central American there are frustrated by the slow pace at which U.S. officials are processing asylum requests.
Sanchez Cordero said Mexico will promote a “Christmas at Home” campaign to encourage many of the migrants to return to their home countries for the holidays.

Home for Navidad?
They can play Luis Aguile’s “Ven a mi Casa Esta Navidad” in the background as the migrants are taking the buses home.  The song encourages people to spend “Navidad” with “la familia”.
Back to the story, I am not surprised a bit.  President Trump threw the caravan right back at Mexico and the caravan leaders.
I would add that my friend said that people in Mexico are asking a simple question:  When is President AMLO (as they call him south of the border) going to do something for Mexicans?
In this case, he is spending pesos on Central Americans.  Yesterday, we learned that he is importing Cuban doctors  to a country that has no shortage of them.
As my friend said, maybe he will remember that he is “el presidente de Mexico,” not Guatemala or Cuba.
PS: You can listen to my show (Canto Talk) and follow me on Twitter.

Pelosi to media: Don't talk so much about Trump!

This is an interesting comment:   "Pelosi tells media not to cover the president's criminal probes 'morning, noon and night'"!

The lady is right.  The media's obsession with everything Trump takes all of the oxygen out of the room.  Also, her comments confirm that there is no political future for the Democrats to talk about impeachment.