Suddenly it’s all about supply chain 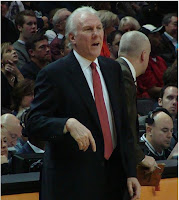 Another Columbus Day and another day to hear from the "wokes" about the man who landed here more than 500 years ago.  It's amazing how poor Christopher gets blamed for everything.  Hard to believe that Columbus harmed Latin America more than their own leaders have.

Check this out from Coach Gregg Popovich of the San Antonio Spurs of the NBA:

Popovich, the head basketball coach for Team USA who is often unafraid of sharing his opinion on cultural hot topics, is among the critics of the holiday. He said in last weekend’s interview that Columbus took slaves, mutilated and murdered while initiating “a new world genocide.”

He said the Indigenous Peoples’ Day proclamation by Biden on Oct. 8 was way overdue for the United States and questioned why Columbus Day should still be honored by others. “It’s no knock on Italian Americans. That’s a silly argument. It’s like saying we should be proud of Hitler because we’re German. I mean it makes no sense,” Popovich said.

“It’s about Columbus. It’s not about Italian-Americans. And so, there are a lot of states that have come out and scratched the Columbus Day and made it Indigenous Peoples’ Day. But in our city, are we that backward that we have school districts that do that? I’m amazed. Just amazed”

Honestly, who is really backward here?   Are school districts backward for honoring Columbus or Coach Popovich for saying nothing about what happens in China?

It's no secret that the NBA enjoys economic advantages from its relationship with China.  I'm not knocking the NBA for expanding its games into the China market anymore than the NFL into Europe or whatever.  It's business and I understand it.

Where are the journalists?  I mean those sports journalists who are always talking about systematic racism over at ESPN?  Are they so ignorant about Coach Popovich's hypocrisy here?  Why aren't they asking about genocide in China?  Or are some of these journalists afraid of having their press passes canceled for the next NBA extravaganza in China?

In the meantime, NBA viewer ship is down and, more importantly, trust in the media is low.  Wonder why?  On one hand, you got athletes bad mouthing police and on the other hand reporters protecting China.  What could go wrong with that?
P.S.  You can listen to my show (Canto Talk).  If you like our posts, click send, and drop a dime here.
Posted by Silvio Canto, Jr. Post Link ---> 6:00 AM

We say happy birthday to Al Oliver who was born in Ohio on this day in 1946.