The congresswoman from Georgia plus courts & schools

Thursday’s video: The border and COVID 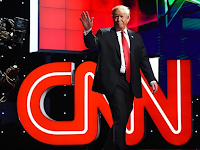 Connie Francis did not have CNN in mind when she put "Who's sorry now" on top of the music charts in 1958.   However, wonder if anyone at CNN is sorry now that President Biden is gone?
According to Variety, the numbers are in:
While it’s too early to conclude any longer-term direction for news ratings after just one week, the downturn could be interpreted as an indicator of what many industry observers had anticipated: With Biden in the White House, networks that have spent the last four years railing consistently against Trump have lost the main attraction that energized their audience bases, making it difficult to hold onto the elevated viewing levels.
Yes, the main attraction is gone.
President Trump was like J.R. Ewing, the famous character from the "Dallas" series.   Half of the country hated him.  The other half loved him.  But everybody tuned in to watch his antics.
Yes, CNN will get a boost from the impeachment hearings.  Sooner or later, that will pass too and no-drama Biden will drive the media crazy.   It's hard to keep three 24/7 news channels busy when there is nothing go on.
My guess is that CNN bet on a tight Trump reelection.  It did not happen. So say hello to "Gilligan's Island" because Don & Chris are a thing of the past.
P.S.  You can listen to my show (Canto Talk).
Posted by Silvio Canto, Jr. Post Link ---> 6:40 AM