California recall plus General Milley said what and Hispanics in Texas

Wednesday's video:
What did General Milley say?
Click to watch:
P.S.  You can listen to my show (Canto Talk).  If you like our posts, click send, and drop a dime here.
Posted by Silvio Canto, Jr. Post Link ---> 11:00 AM

Yesterday, I saw a photo of Miss Sandy O, the young lady, as Senator Joe Manchin would say, who represents a district in NY. She was wearing a fancy big white dress promoting the slogan "tax the rich".  It drew a wonderful response from Representative Dan Crenshaw:

I’m not even mad at the lack of self awareness or hypocrisy anymore. At this point it’s just hilarious.

These people are a giant joke.

Indeed, they are the "joke of jokes."  They are so disconnected from reality that they can't see just how ridiculous they are.

As I've learned, she attended a party:

Ocasio-Cortez wore a white gown by Brother Vellies with “Tax the Rich” in red letters splashed across her back and accessorized with a matching slogan on her bag to the America-themed ball.

The 31-year-old rep, who is the darling of the far left, could have found a more receptive audience to her sartorial statement at a workers rally. The Met Gala is an exclusive event, which is a parade of millionaire pop stars, wealthy actors, trust fund society swans and members of the gliteratti.

Wow, maybe Sandy O's dress should have had a different message, or something like everybody here who can afford $35,000 for a one night stand should pay more taxes.

Watching her looking rather good in her curvy outfit reminded me that this was the same young lady who couldn't afford to pay the rent in the nation's capital.   That was 2018.  Where does a young lady who can't afford the rent get the money to go to this party?  Is that an unfair question?

Back in her district, some of her constituents can't pay the rent or wish they had one of those 25,000 Amazon jobs that the young lady opposed.

Looking good, but looking rather unserious as well.  It would have been more real is she had listened to Marty Robbins and wore "A big white sports coat and a pink carnation."  At least, she would have connected with the blue collar workers who used to vote for her party. 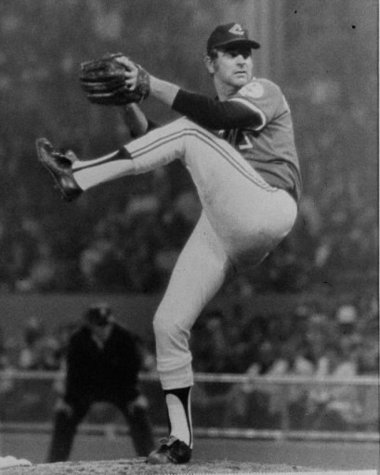 We say happy birthday to the one and only Gaylord Perry who was born in North Carolina on this day in 1938.

Perry broke with the Giants in 1962 and had some great seasons with San Francisco (134 wins).   Then he was traded to Cleveland to Texas to San Diego to New York Yankees,  Atlanta, Kansas City and Seattle.