We could use another Joe DiMaggio streak 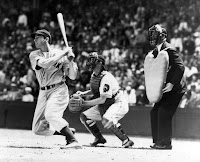 What makes the streak so amazing is how often DiMaggio got only one hit in the streak.  Also, he did not sit out double-headers, as many players do.  He got hits off Hall of Famers Lefty Grove and Bob Feller (twice), plus Venezuelan Alex Carrasquel.  Alex won 50 games but made one of the most important lists in baseball history.

The streak was a symbol of consistency, as Lawrence Baldassaro wrote at The Society for Baseball Research:

On May 15, the day the streak began, the Yankees were in fourth place, and DiMaggio had batted a lowly .194 over the previous 20 games.

On June 17, DiMaggio broke the Yankee hitting-streak record of 29 games, set by Roger Peckinpaugh in 1919 and equaled by Earle Combs in 1931.

As DiMaggio's streak continued to grow it gradually became a national obsession. Day after day, across the country, the question was: "Did he get one today?"

In its July 14 issue, Time magazine wrote: "Ever since it became apparent that the big Italian from San Francisco's Fisherman's Wharf was approaching a record that had eluded Ty Cobb, Babe Ruth, Lou Gehrig and other great batsmen, Big Joe's hits have been the biggest news in U.S. sport. Radio programs were interrupted for DiMaggio bulletins."

On June 29, in the seventh inning of the second game of a doubleheader in Washington, DiMaggio hit a single to pass George Sisler's 41-game streak set in 1922, commonly referred to as the "modern record" to distinguish it from Wee Willie Keeler's 44-game streak, the "all-time record" set in 1897.

The New York Times reported on June 30 that the fans "roared thunderous acclaim" to "one of the greatest players baseball has ever known," while his teammates 'to a man,' were as excited as schoolboys over the feat."

Fifteen days later, on July 17, the streak ended in Cleveland's Municipal Stadium in front of 67,468 fans — at that time the largest crowd ever to see a night game — when Indians third baseman Ken Keltner robbed DiMaggio of hits with two spectacular plays.

Over the course of the streak the Yankees moved from fourth place, 5 1/2 games back, to first, seven games ahead of Cleveland. DiMaggio went on to hit safely in his next 16 games, and the Yankees went on to win the pennant and then beat the Brooklyn Dodgers in the World Series.

One of the fascinating sidelights of the streak is that in his 223 times at bat, DiMaggio struck out only five times. In fact, he struck out only 13 times in the entire season. The late Harvard paleontologist and essayist Stephen Jay Gould, noting the streak, called it "the most extraordinary thing that ever happened in American sports."

The streak had another impact.  It kept us busy during that summer of war in Europe.  Not long after getting that MVP award, Pearl Harbor happened, and Joltin Joe was wearing a different uniform.

"Where have you gone, Joe DiMaggio?"  He didn't go anywhere, especially for me, who grew up hearing about DiMaggio from my late father and read about the streak on the anniversary.  My father was 15 in 1941 and checked the living room radio in Cuba every night to hear about the streak.

PS: Check out my videos and posts.