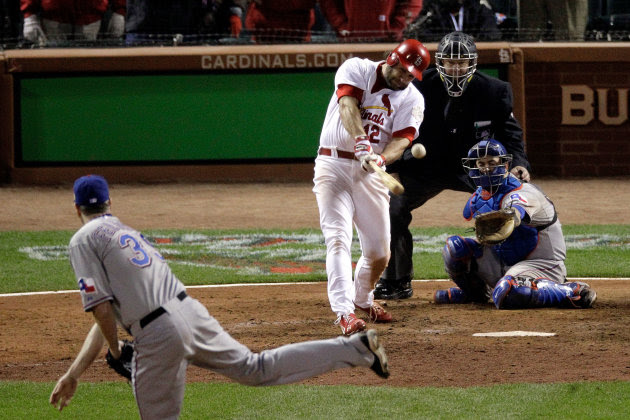 From the 9-1 start to watching Derek Holland blossom into a major league pitcher, the 2011 season was a fan's dream.

The Rangers were a great team to follow, from Ian Kinsler blasting lead-off home runs to Neftali Feliz shutting down games.

However, it was game 6 that will probably stick in our minds for some time.  I am not dwelling on it but it was tough to come that close twice and watch the other guys celebrate.

it was a horrible ending to a game that will go down as a classic:

" Closer Neftali Feliz came in to pitch the ninth.

Ryan Theriot struck out swinging, but Albert Pujols doubled and Lance Berkman walked on four pitches. Craig struck out looking, and Feliz needed just one more out. Instead, Cardinals third baseman David Freese fell behind 1-2 in the count and then hit a long drive to deep right. Cruz went back, but not far enough and the ball sailed beyond his reach for a triple that scored two runs and tied the game.

It did not stay tied for long. Elvis Andrus singled with one out in the 10th off Jason Motte, and Josh Hamilton followed with a home run to right-center to give the Rangers a 9-7 lead.

Darren Oliver took over for Feliz in the 10th to face the bottom of the Cardinals' order and two left-handed hitters. But Daniel Descalso grounded a single through the right side and Jon Jay blooped a hit into shallow left, putting runners on first and second. They were bunted over by pinch-hitter Kyle Lohse, and Scott Feldman replaced Oliver.

Theriot hit a weak grounder to Beltre at third, who threw to first for the second out while Descalso scored. Pujols received an intentional walk. Berkman worked the count to 2-2 and then lined a run-scoring single to center to tie the game.

The game went into the 11th. The Rangers did not score in the top of the 11th and Freese won it with a walk-off home run off Mark Lowe.

It was a game that will be long be remembered, but there were other highlights worth recalling."

Like any 'classic game", we will get to watch it over and over at the ESPN classic channel or at that wonderful new MLB network.

Yes, get ready to watch Nellie Cruz misplay that fly ball in the 9th and that "Twilight Zone" bottom of the 10th inning when the Cards came back for the second time.

I guess that Cardinals, not cats, have 9 lives!

P.S. Check out our baseball show with Coach McCrary after the series: