Twilight Zone: There is something obscene about Pres BO attacking The Supreme Court with two foreign leaders by his side 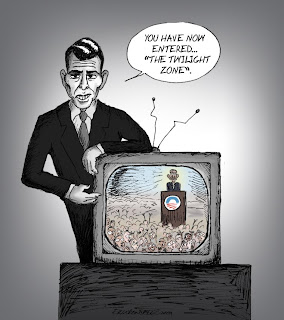 This is beyond words.  This is really obscene.  I have never seen anything like it.

Yesterday, Pres BO took some rather unprecedented shots at The Supreme Court during a joint press conference with Pres Calderon of Mexico & PM Harper of Canada.

To be fair, Pres BO did not initiate the conversation.  He was asked a question about the Supreme Court and last week's presentation about the constitutionality of the law.

Pres BO should have said:

1) This is not a good time for that question because we have guests and the topic is NAFTA or other trade relations; and,

2) I respect The Supreme Court.  They have every right to review my law.

Instead, Pres BO unleashed a rather crude attack on the Court.  He questioned its legitimacy, i.e. unelected.

This is so typical Obama.  This is the kind of bitter side of Obama that we are going to see if the Court overturns the law or he is defeated in November.

This is a man who can not appreciate that people can have honest differences with his view of the world, our Constitution or his economic ideas.

If you disagree then you just don't appreciate how smart Obama is.....or you just don't understand how important all of those bankrupt green technologies companies are to the future of the world......(Another company goes under)

The WSJ has a "must reading" editorial today:


"President Obama is a former president of the Harvard Law Review and famously taught constitutional law at the University of Chicago. But did he somehow not teach the historic case of Marbury v. Madison?"

Bill Katz expanded on the topic this morning:


"I've been observing presidents for longer than I care to admit, but I must report that I've never seen anything quite as weird as Barack Obama's strange performance yesterday, delivered in the presence of the president of Mexico and the prime minister of Canada, who were visiting."

The Supreme Court is doing what it was designed to do by The Founding Fathers.  The court was created to review the constitutionality of laws passed by Congress.

Ironically, BO-Care would be "home free" if Pres BO & Dems had been honest from day one and funded the plan with a "tax".

Pres BO & Dems didn't have the political courage to call it a tax, or something that Congress can do under our Constitution.  Instead, they created this weak approach of extending the commerce clause and forcing Americans to purchase insurance.

Pres BO also said that he used to hear conservatives talk about judicial activism.  He is right about.  We conservatives have criticized judges who legislate or find "rights" that are not in the Constitution, such as abortion or same sex-marriage.

Barry Casselman is right.  Wonder how the Justices in The Supreme Court enjoy hearing that from Pres BO?  They probably didn't.  Click for our Tuesday conversation:

Listen to internet radio with Silvio Canto Jr on Blog Talk Radio
Tags: Twilight Zone:  There is something obscene about Pres BO attacking The Supreme Court with two foreign leaders by his side  To share or post to your site, click on "Post Link". Please mention / link to the My View by Silvio Canto, Jr. Thanks!
Posted by Silvio Canto, Jr. Post Link ---> 12:01 AM