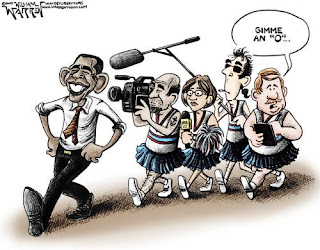 During the 2008 campaign, and for much of the Obama presidency, some of us have complained about "a media in the tank for Obama" syndrome.

Frankly, this is not your old "liberal media" whining that some conservatives have screamed about for years.

I am talking about the media dropping all pretense and wearing "BO cheerleader outfits".

A week ago, Mr Singleton, the  head of AP, gave Pres BO an introduction that was totally ridiculous.  It bordered on fanaticism.  It was an introduction better fit for a teen girl introducing a pop star than the head of a news organization presenting a politician.

Wasn't anyone from AP embarrassed to witness that?  At what point does it get so embarrassing that even liberals look at the roof and wonder what's going on?

Unfortunately, the poll was so dishonest that you have to call into question the competence of the pollster and the integrity of the organization that used it.

Our friend Bill Katz of Urgent Agenda posted about this.  As Bill indicated, the sample was so skewed to the Dems that it made the headline worthless and just plain dishonest.

By the way, one bit of good news about this poll is that even a skewed sample still shows how vulnerable Pres BO really is.

The media continues to lose readers.  They blame it on the internet.  However, I think that there is something else at play.  I think that readers are just sick and tired of paying for "biased reporting" specially when they can do their own research on the aforementioned internet.

Click here for Segment 2 of our Thursday show with Richard Baehr: