My thoughts about the Florida primary 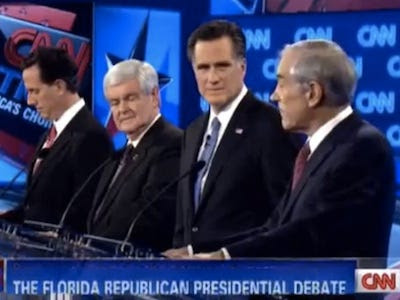 Mitt Romney scored a big win in Florida and probably ended the Gingrich campaign.  I'm not saying that Gingrich will drop out but it's hard to see how he gets to the nomination.
Romney and Gingrich had a rough battle.   My guess is that we've seen the end of Romney's attacks because Gingrich won't be able to compete after Florida.
We go to Nevada and Romney should win that one too.
I support Mitt Romney because I believe that he has the best chance to defeat Obama.  Again, this is about defeating Obama because we can not have him select the next 2-3 justices to the Supreme Court.
By the way, I was happy to see that Rick Santorum's little daughter is ding well.  It may have been the best non-electoral headline of the night!
Check out our chat with Barry Casselman about Florida and beyond.
Listen to internet radio with Silvio Canto Jr on Blog Talk Radio
Tags: The Florida primary 2012  To share or post to your site, click on "Post Link". Please mention / link to the My View by Silvio Canto, Jr. Thanks!
Posted by Silvio Canto, Jr. Post Link ---> 12:01 AM