Dear Pres BO: Who is going to apologize to the parents of the soldiers killed by the mob in Afghanistan? 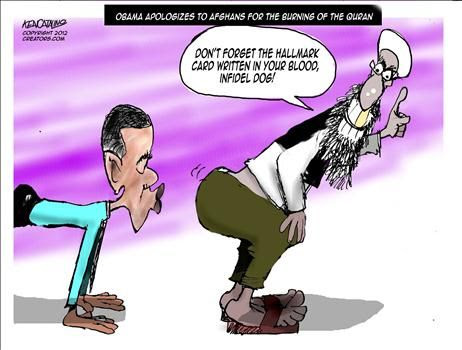 Once again, we've seen just how irrational things can get in the Middle East:


"Yesterday, Afghanistan saw its third day of rioting after workers collecting garbage at NATO's Bagram air base found charred remains of religious texts, including the Koran.
The texts in question had been defaced with extremist propaganda and had been disposed of.
It's unclear who did the disposing, but it was reported that the process was overseen by a U.S. officer.
Since then, crazed mobs have gathered in Afghan streets chanting "Death to America," and the Taliban urged Afghans to "continue seeking revenge until punishment is dished out with your hands."
On Thursday, outside a U.S. base in eastern Nangarhar province, an Afghan soldier did just that, killing two American soldiers and escaping into the welcoming arms of an approaching mob.."  (WashTimes)
As we've posted before, religious symbols and books must be treated with respect.  However, the violent reaction is uncalled for and won't make the Afghanistan War more popular in the US.

Furthermore, what's the point of a presidential apology?  What exactly did our troops do wrong?  Shouldn't the commander in chief stand with the troops?

Apology?  Will Pres Karsay apologize to the parents of the soldiers killed by these mobs?

Click for our discussion with Dr Ileana Johnson-Paugh about the apology and other issues:

Listen to internet radio with Silvio Canto Jr on Blog Talk Radio
Tags: Dear Pres BO: who is going to apologize to the parents of the people killed by the mob in Afghanistan?  To share or post to your site, click on "Post Link". Please mention / link to the My View by Silvio Canto, Jr. Thanks!
Posted by Silvio Canto, Jr. Post Link ---> 12:20 AM