Will the international left call on Fidel & Raul Castro to give up their millions? 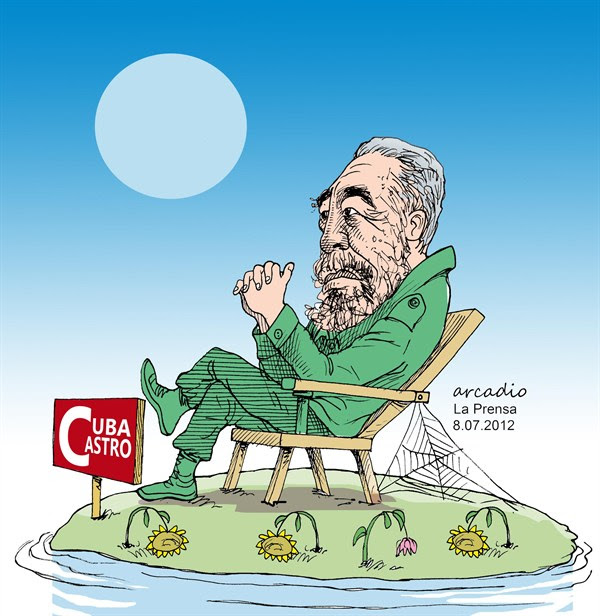 In fact, the Castro family fortune, a combination of their total control of the Cuban economy and the stolen property of US and Cuban citizens, is estimated at over US $ 500 million.

Yes, I said millions or "millones" in Spanish for all of the lefties in Latin America still invested in the fairy tale about the two bearded guerrillas who saved the island.

We now have further information about the Castro fortune.   It comes from a new book properly titled "The double life of Fidel Castro" by Juan Reinaldo Sanchez, a former bodyguard.

It reveals a Castro, known to us Cubans and Cuban Americans who know the truth, but not one that most of the sympathetic left, Michael Moore, or US college professors, will recognize.

This is a bit from the book, as reported at The New York Post:

"To Cubans, Fidel Castro presents himself as a man of the people, claiming to make only 900 pesos a month (about $38) and owning no property other than a modest “fisherman’s hut” somewhere on the coast.   In truth, El Jefe is worth hundreds of millions and owns 20 properties, including a chalet where he goes duck hunting every year and a private marina in the Bay of Pigs.  His main home is Punto Cero, where his family was kept hidden away. No one knew until recently that he had a wife, Dalia, with whom he had five sons, all with “A” names: Alexis, Alex, Alejandro, Antonio and Angelito. Even Fidel’s own brother, Raúl, did not meet them until the children were adults.   Few, meanwhile, know that Fidel has had at least three children out of wedlock, including one with his personal interpreter and longtime mistress, Juanita.   Castro may not be as ostentatious as Khadafy or Saddam Hussein, but he’s rich beyond most people’s dreams. His simple appearance is due more to laziness than austerity. Castro, who rarely wakes before 10 a.m. or 11 a.m., is happy not to wear a suit and confessed that the main reason he has a beard is so he did not have to shave every day.    But there were plenty of perks to being the depository of Cuba’s wealth. He has his own private basketball court where he never lost a game. And his own private hospital housing two people full-time simply because they shared his blood type.   At Punto Cero, each member of his family possessed his or her own cow, so as to satisfy each one’s individual tastes, since the acidity and creaminess of fresh milk varies from one cow to another. And so the milk would arrive on the table, each bottle bearing a number, a little piece of paper scotch-taped onto the bottle, corresponding to each person’s cow.   Antonio’s was No. 8, Angelito’s No. 3, and Fidel’s No. 5, which was also the number he wore on his basketball shirt.  There was no question of deceiving him: Fidel possessed an excellent palate that could immediately detect if the taste of milk did not correspond to that of the previous bottle."

We saw the same with Saddam Hussein in Iraq and Nicolae Ceaușescu in Romania.   We discovered palaces and a lifestyle that has very little to do with a man of the people.

It may be time for the Latin American left to call on the Castros to give back their wealth, specially since it was taken rather than earned.

At the very least, I call on President Obama to demand that the Castros use their family wealth to compensate the thousands of US citizens who had their property stolen in the name of their revolution.