Why aren't we taking out those flag waving ISIS trucks? 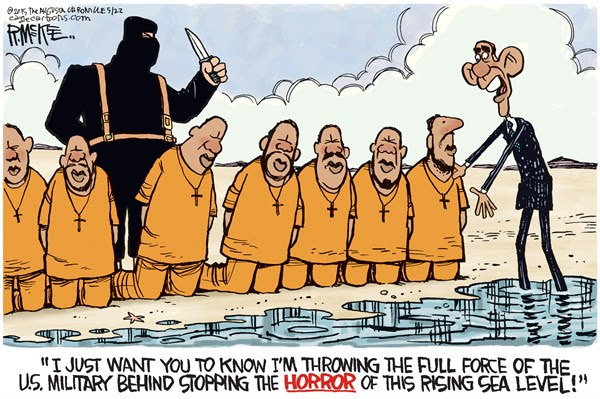 
We know where President Obama's priorities are.   He sees global warming or climate change as the threat of our times.   Indeed, we have to care for our Earth but President Obama needs to read his daily security briefing more seriously.

By now, ISIS has taken Ramadi and sits 90 miles (i.e. Dallas to Waco) from our US Embassy in Baghdad.   Do any of the "yes we can" screamers surrounding President Obama remember the Iran hostage crisis of 1979-81?   A Baghdad hostage crisis would make Tehran look like a PG movie.

They've also entered the city of Palmyra in Syria:

The Islamic State terror group now controls over half of Syrian territory after seizing the village and archaeological site of Palmyra Thursday, activists monitoring Syria's civil war said.Rami Abdurrahman of the Britain-based Syrian Observatory for Human Rights told the Associated Press the extremists overran the archaeological site, just to the southwest of the modern settlement on Palmyra, shortly after midnight local time.In Damascus, state TV acknowledged that pro-government forces had withdrawn from the town. A Facebook page close to ISIS published a statement Thursday, purportedly from the group, saying "the soldiers of the Islamic State" completed their control of Palmyra. The capture came after government forces collapsed, "leaving large numbers of dead whose bodies filled the streets," it said.

It will not shock me if we wake up one morning and hear that our embassy is under siege and some US personnel is held hostage.

I'm sure that you've all seen those parades of trucks celebrating and waving those ISIS flags.

Take them out.   Send ISIS a message that their advances will be met with US force.   Fire missiles from ships in the Mediterranean and use strike planes to deliver a message.

The flag waving trucks are a demonstration of ISIS's advances.   Stop them.  Blow them up with a display of bombs and missiles unseen by these terrorists.

What are you waiting for Mr President?    You can't run out the clock on this one!