Wanted: A Democrat who screams "enough" to the Clinton ways 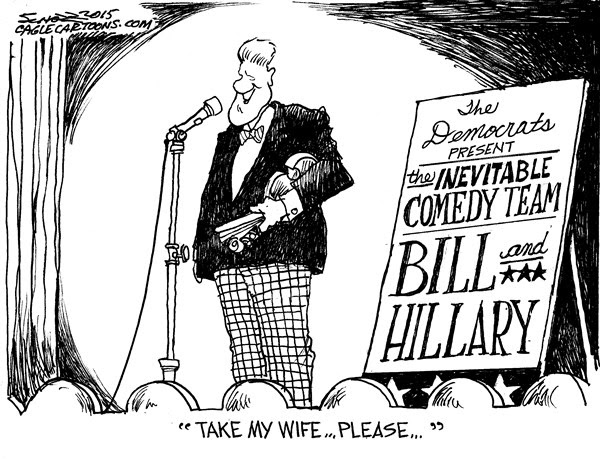 
Wesley Pruden wrote today that there is panic over at the Dems' corner:

She has already changed her words to match the music of the left on immigration, gay marriage, criminal-justice reform and her ties to Wall Street. Such changes, says Colin Reed, director of the America Rising Political Action Committee, “reinforced all her worst attributes as a candidate and hurt her image among voters of all stripes. [Liberal] voters know that she’s not truly one of them.” Independent voters, on the other hand, “see a desperate politician staking out far-left positions that are outside the mainstream of most Americans.”

Panic?  disappointment?  she is not one of us?  poll reader?

When will one of these Democrats, from whatever corner, stand up and say enough to these Clinton games.

How can a woman with this much secrecy walk into the Oval Office?   Do we really want to spend her first term un packaging all of these gifts from The Foundation to emails to everything that is the Clinton ways.

Hillary Clinton is an ethical time bomb ticking away and it won't be pretty when it goes off.

Frankly, the country desperately needs for a Democrat to stand up and say that the party deserves more than a coronation, specially the coronation of such a corrupt couple.

Democrats want to talk about income inequality?  The Clintons have traded on their name and offices to make millions!

Democrats want to talk about the working man?  Hillary Clinton is on "mute" about the Asian trade deal.

Democrats want to talk about foreign policy?  Hillary Clinton is again on mute refusing to talk about Libya, her role in the troop withdrawal from Iraq, the Benghazi disaster, etc.

We remember how GOP leaders walked over to President Nixon in the summer of1974 and told him to resign for the good of the country.  It wasn't pretty but sometimes it takes an insider to clean up the mess that the Clintons have put the party in.

So I say again:   I'm looking for a Democrat who will tell the Clintons to step aside and allow the country to have a discussion about the issues we face.

The Clinton are more than old faces.   They are something that the US does not deserve at this time of conflict abroad and confusion at home.