Anyone planning to march over the latest GDP numbers? 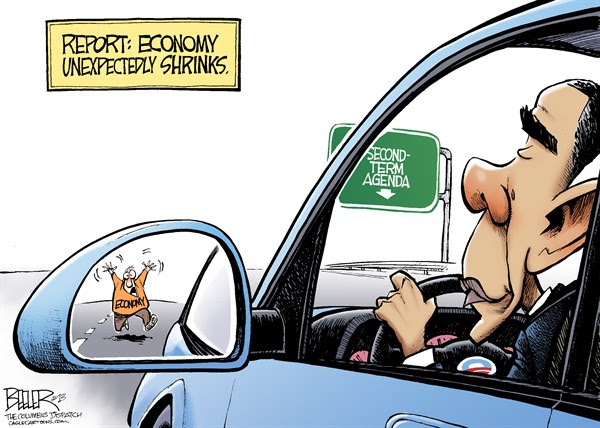 We live in a free country, so I'm OK with people marching peacefully and respectfully.  The alternative is Cuba even after the famous "thaw" between President Obama and Raúl Castro.

My question this morning is this: is anyone planning to march about the lousy GDP numbers?

I keep hearing that we need "jobs," so a little marching by the White House may be in order.

The gross domestic product grew between January and March at an annualized rate of 0.2 percent, the U.S. Commerce Department said, adding to the picture of an economy braking sharply after accelerating for much of last year. The pace fell well shy of the 1 percent mark anticipated by analysts and marked the weakest quarter in a year.
The economy had expanded at a rate of 2.2 percent in the final three months of 2014 and at a rate of 2.4 percent for the year.
Economists, employers and policymakers now face the challenge of determining whether the slowdown is temporary — stemming mostly from an unusually snowy winter in the Northeast — or a sign of broader problems.

We are in year 7 of "hope and change" and year 6 of "the stimulus," but nothing is hopeful, changing, or stimulating.  This is especially true of those districts run by the Democratic Party.

Here is a placard for the marchers: President Obama, 0.2% is not the change we've been waiting for!