US-Cuba talks: It looks like a one way street to me 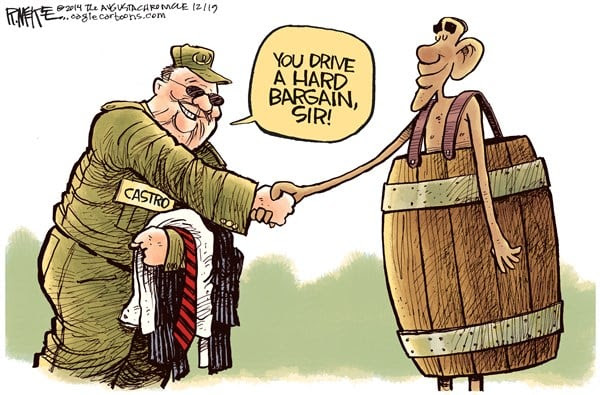 We keep hearing that the US and Cuba are making progress on the so called talks.   I guess that it depends on what the meaning "negotiations" or "progress" is.

So far, we've agreed to sit down with the Castro regime.  This is huge because every previous administration, from Kennedy to GW Bush, refused to meet unless certain conditions were met beforehand.

We've removed them from the terrorist list.  This is huge, specially since a couple of ships with illegal weapons have been discovered going to Cuba recently.

Which US demands has Cuba agreed to?   The answer is "nada" or nothing, as reported by Capitol Hill Cubans:

"The road to establishing diplomatic relations has been a unilateral gift bag for the Castro regime.Castro asks, Obama delivers.

And what has Castro done?Nada."

It's infuriating and I don't mean it  as a Cuban American who had a family member in one of Castro's political prisons for 14 years without a trial.

I am angry because we had all of the cards, specially now that Venezuela can no longer subsidize the Castro regime with oil.   Venezuela can't anymore.   Raul Castro is on his knees, without the Caracas subsidy and no country willing to offer them credit anymore.

We didn't have to make a deal for Allan Gross or send back spies sitting in US prisons.    We could have said put Gross on a plane to Miami and we'll call you later.

We could have demanded the unconditional delivery of Joanne Chesimard, the woman who killed a New Jersey state trooper.   From President Reagan to President GW Bush we stopped talking whenever Castro refused to release her.   The Obama team keeps talking despite Cuba saying that this issue is off the table.    Sorry but why are we still at the table?

Unfortunately, we've allowed Raul Castro to rant about the embargo and Guantanamo.   In the past, US presidents hung up the phone when Raul or Fidel ranted like that.  Today, we listen to them, as if they are legitimate grievances that we should be sensitive to.

We remind you that this is the same administration negotiating a deal with Iran, a country far more consequential to our national security than Cuba.

The Obama administration can't negotiate a tough deal with Cuba.   What makes me confident that they can do it with Iran?