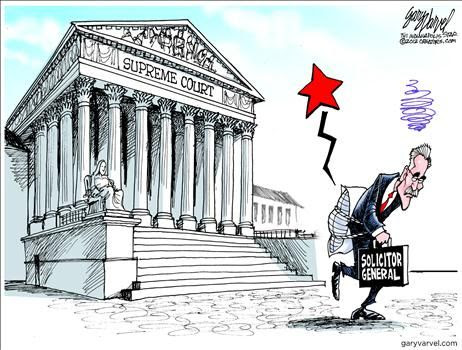 Let me make this very simple.

What if you had just bought a new insurance policy?

What if the first invoice was significantly higher than the amount of the contract?

What if it included clauses or excluded coverage that no one ever told you about?

What would you do?

Most of us would start by calling the insurance company for an explanation.  Secondly, we would contact the Texas Dept of Insurance and file a complaint of misrepresentation and fraud.

Welcome to Obama Care!  Read this from Karl Rove:


"Last week, the Congressional Budget Office released new budget projections for it over the next 10 years.
In March 2010, the CBO estimated the gross cost at $940 billion for 10 years. Now it forecasts the cost to be $1.76 trillion, nearly double. For the eight years (2012 through 2019) included in both estimates, the CBO now says costs will run $90 billion more than originally forecast.
The law's coverage provisions (such as premium subsidies and Medicaid outlays), which cost $66 billion in 2014 when implemented, will cost $265 billion in 2022, according to the CBO and the Joint Committee on Taxation.
These higher costs will add to the national debt since taxes cover well less than half of ObamaCare's existing price tag."

The cost issue was not really a shock because government program have historically turned out to be more expensive than projected.  Can you say Medicare?

The "religious freedom" issue is further proof that the bill was never read or discussed openly.   See this article from Howard Slugh.

For most of us, the "religious freedom" issue is the deal breaker, or the one that we can not swallow.

Click here for our Friday show with Dr Ileana Johnson: