The most famous name from the planes on 9/11 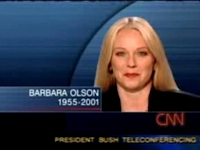 It was 20 years ago this weekend, but we are reminded of something new with every recollection of that terrible day.

Many years ago, Barbara Olson was a guest commentator on FOX and CNN, married to former U.S. solicitor-general Theodore "Ted" Olson.  I don't know if they were a "power couple," but they certainly were very successful on their own.

Barbara wrote a couple of books about the Clintons.  Ted worked on behalf of then Governor Bush in the famous Bush v. Gore case that settled the 2000 election.

On Tuesday, September 11, 2001, Barbara said "happy birthday" to Ted and took a flight to California.  Here is the story:

Barbara Olson, a conservative commentator and lawyer, wasn't panicked when hijackers took over her flight on Sept. 11, 2001, from Washington Dulles airport to Los Angeles, where she was heading for an appearance on Bill Maher's TV show.

She managed to call her solicitor general husband, Ted Olson, twice from the back of the plane where the terrorists, armed with knives and box cutters, herded the passengers. She reported the hijacking aboard American Airlines Flight 77 and asked what she could convey to the captain.

According to the 9/11 Commission report, only Olson and flight attendant Renee May were able to make phone calls to loved ones from the plane before it was crashed into the Pentagon. Twenty years later, Barbara's husband still marvels at her bravery and calm in the final moments of her life.

The two phone calls were very brief and both ended abruptly. Two hijacked planes had already crashed into the World Trade Center and Olson's in-flight call prompted Ted Olson to warn others at the FBI and Justice Department that a third plane was under attack.

"Barbara was an extraordinarily resourceful person," Olson told Fox News. "She was also a fighter. She would not have taken this quietly."

I recall hearing about Mrs. Olson in some of the early reports.  At the time, she was the most famous person in those planes.  Later, we learned the names of the other heroes, but Barbara was a face many of us recognized.

It's another memory from that terrible day and why so many of us were happy to see that President Biden did not speak to the crowds remembering 9-11.  It's a sad day when the president has to record a message rather than address the families and heroes present.