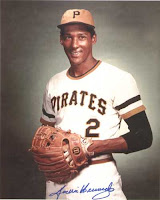 We remember Jackie Hernández  (Jacinto Hernández Zulueta) who was born in Central Tinguaro, Matanzas Cuba, on this day in 1940.
Jackie broke with the Angels in 1965. He played 9 seasons and hit .208 over 618 games. His best season was 1969 when he played 145 games with the expansion Royals. Jackie played for the Pirates in all 7 games of the 1971 World Series.
On September 1, 1971, Jackie made history as one of the 8 black position players who took the field for the Pirates.
After the majors, Jackie played in Mexico and retired in Miami.
P.S.  You can listen to my show (Canto Talk).  If you like our posts, click send, and drop a dime here.
Posted by Silvio Canto, Jr. Post Link ---> 12:05 AM