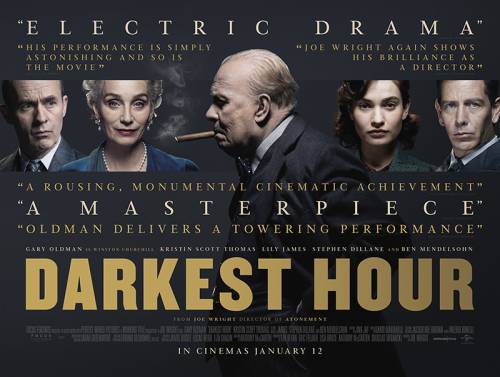 On Wednesday, we went to see Darkest Hour, a movie about Prime Minister Winston Churchill and the U.K. in 1940.  I assume that the movie will soon be available online, but we went the old-fashioned way: a big box of popcorn and a large screen.
A few weeks ago, I learned of the movie from reading a review by Professor Victor Davis Hanson:

Within days of Churchill taking office, all of what is now the European Union either would be in Hitler’s hands or could be considered pro-Nazi “neutral.”
“Darkest Hour” gets its title from the understandable depression that had spread throughout the British government.  Members of Churchill’s new War Cabinet wanted to sue for peace.  Chamberlain and senior conservative politician Edward Wood both considered Churchill unhinged for believing [that] Britain could survive.
Both appeasers dreamed that thuggish Italian dictator Benito Mussolini might be persuaded to beg Hitler to call off his planned invasion of Great Britain.  They dreamed [that] Mussolini could save a shred of English dignity through an arranged British surrender.
Not Churchill.

The movie does have a bit of fantasy: the subway ride, when P.M. Churchill meets constituents who are in no mood to surrender or cut deals with Hitler.  While it did not happen that way, the British willingness to fight and defend their homeland was no fantasy.  It became clear when P.M. Churchill spoke to the Parliament.
Let me leave you with a few other impressions.
First, you will love Mrs. Churchill.
Second, I was reminded of recent examples of presidential leadership, from President Bush going against conventional wisdom and doing the surge in Iraq in 2007 to President Reagan overruling his diplomats and calling on “Mr. Gorbachev” to “tear down this wall.”
Third, do you think the modern U.K. would recognize the fighting spirit of its great grandparents in 1940?  I don’t think so.  That may be the most depressing part of the story.
PS: You can listen to my show (Canto Talk) and follow me on Twitter.