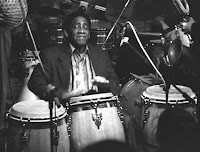 Ramón “Mongo” Santamaría Rodríguez was born in Havana on this day in 1917.      He died in Miami in 2003.
According to his biography, he moved to New York City in 1950 and made his US debut with Pérez Prado.   He followed that by performing with Tito Puente and and recording with Cal Tjader (1957-1960).
In 1963, he put “Watermelon man” in the Top 10 of Billboard USA.    The rest is musical history and many of us danced to his recordings for a very long time: